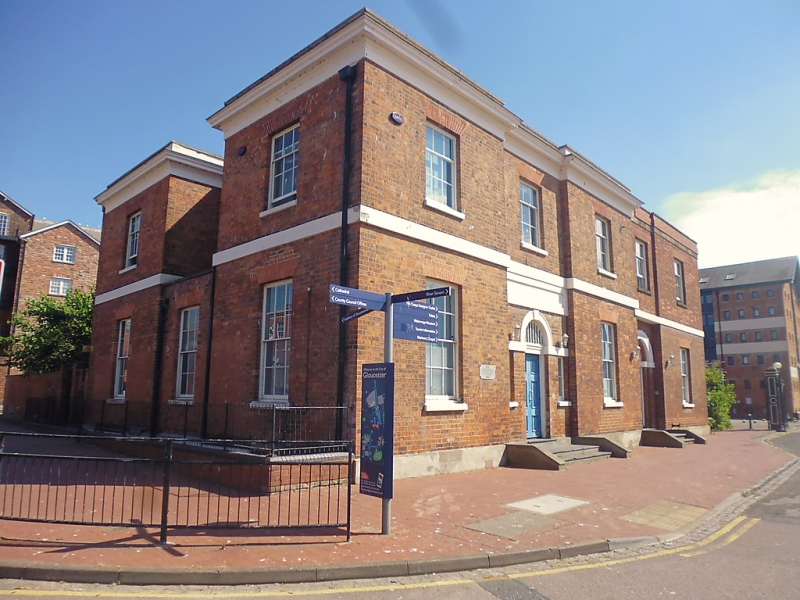 Offices. 1831 with 1854 and mid C20 extensions. Originally
built for the Gloucester and Berkeley Canal Company as offices
and living accommodation for the Clerk of the Company; later
the offices of the Dock Company and, after 1947, the British
Waterways Board; renovated for professional offices 1993.
Brick with stone details, slate roof.
PLAN: the primary building a double-depth block facing
entrance gates to The Docks to east, and facade on north side
facing Commercial Road, both facades of three bays with the
outer bays extruded; later additions on the south and east
sides.
EXTERIOR: two storeys; offset stone plinth, a raised stone
band at first-floor levels, a stone crowning entablature with
blocking course to the primary building, and a band and brick
parapet to the later additions.
The original doorway; on the west side of the primary building
in the central recessed bay the original entrance doorway
partially blocked and a pair of casements inserted in later
C19, but retaining the semicircular fanlight with vertical
glazing bars, the opening framed by moulded architrave with
projecting keystone, and with stone imposts continued to each
side as lintels to original sidelights infilled with later C19
casements, across the central bay above the arch a stone panel
with a raised frame, probably for an inscription; in each
projecting bay to either side a sash with glazing bars (3x4
panes) and on the first floor three shorter sashes with
glazing bars (3x3 panes).
On the north side sashes similar to the west front on both
floors except in the central bay on the first floor where the
first-floor band replaced by the brick sill to a tripartite
window containing sashes with glazing bars (3x4 panes in the
central sash). The extension to the south of the primary block
of two bays facing west and three bays facing south, was
originally of one storey with the second added in the C20.
INTERIOR: not inspected.
(Conway-Jones H: Gloucester Docks An Illustrated History:
Gloucester: 1984-).