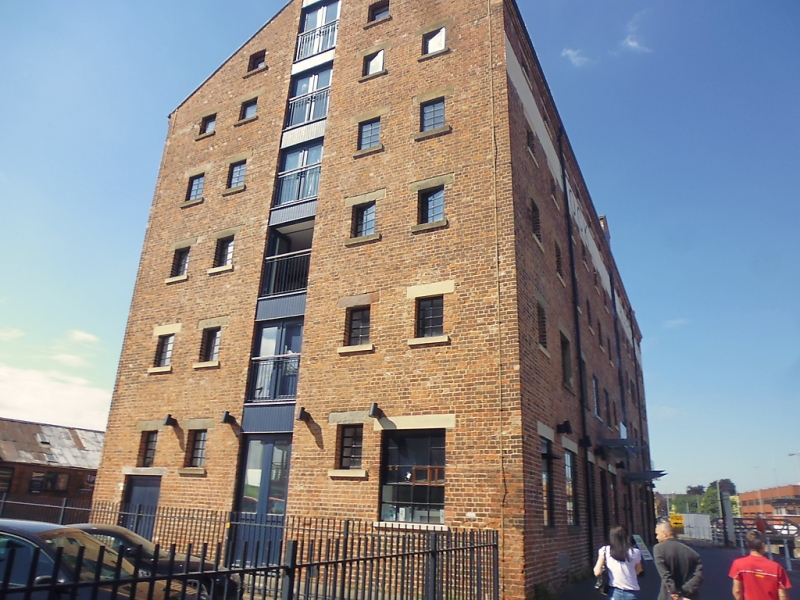 Bonded warehouse, now antiques market, restaurant and offices.
1834. For J and C Sturge, corn merchants; in 1877 additional
cast-iron columns supplied and inserted to strengthen building
by William Savory and Son, engineers of Gloucester; roof
replaced 1917 following fire; altered c1920 and larger windows
inserted when building used for sack cleaning and repairs.
Brick, stone and timber lintels, slate roof with brick eaves
cornice, internally timber floors supported by hollow
cast-iron columns. A large, rectangular, end-gabled block
facing towards the Lock at north end of Main Basin; a
cast-iron fire escape stair links the loading door openings in
the centre of the east side.
EXTERIOR: five storeys, basement and loft; in the centre of
side a former loading door opening flanked by six windows on
south side, in the centre of each gable-end wall a former
loading door opening flanked by two windows on each floor and
by a single window in the gable; on the lower three floors of
all elevations much of the fenestration altered by the
insertion of larger windows in openings with stone lintels,
otherwise the original small, square windows on the upper
floors have timber lintels; a later, cast-iron, fire escape
stair to all doors in the central loading door opening.
5-window north gable.
INTERIOR: the later inserted cast-iron columns inscribed with
the name of the supplier; former open floors altered by the
insertion of partitions in late C20.
(Conway-Jones H: Gloucester Docks An Illustrated History:
Gloucester: 1984-: 165).