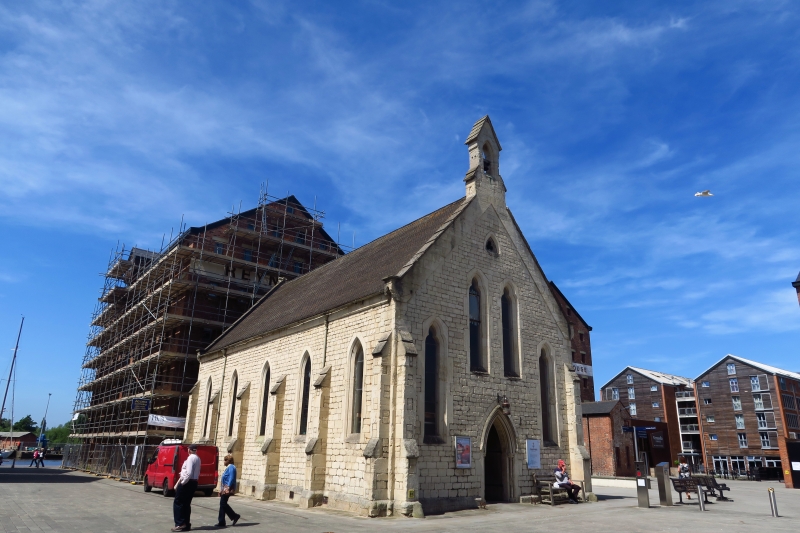 Chapel. 1848-9. By John Jaques for a committee managing funds
obtained from subscriptions and private benefactions to
provide a Church of England extra parochial chapel to minister
to sailors and dock workers. Squared rubble in diminishing
courses and ashlar details, plain clay tile roof with bands of
fishtail tiles. Early Pointed style. Single cell of five bays
with ritual orientation reversed.
EXTERIOR: offset ashlar plinths, slightly setback buttresses
with offsets at the angles and similar but slightly shorter
buttresses defining each bay, coped gables with kneelers at
either end and on the apex of the east (entry) gable a gabled
bellcote with a single bell in the arched opening. In the east
wall an arched doorway with moulded jambs flanked on either
side by a tall lancet and a pair of shorter lancets above, all
with trefoil heads; a small trefoil light in the upper part of
the gable. In each bay of the side walls a single lancet, in
the west wall three stepped lancets with trefoil tracery
heads, small trefoil light in upper part of the gable.
INTERIOR: white plastered walls, open queen post roof,
original pews, pulpit, altar rail and other fittings; in the
three lancets above the altar stained glass by Clayton and
Bell and to either side of the lancets large panels in arched
frames within crocketed gables with finials, the panels
inscribed with the ten commandments; above the lancets a
painted ribbon inscribed "PRAISE THE LORD".