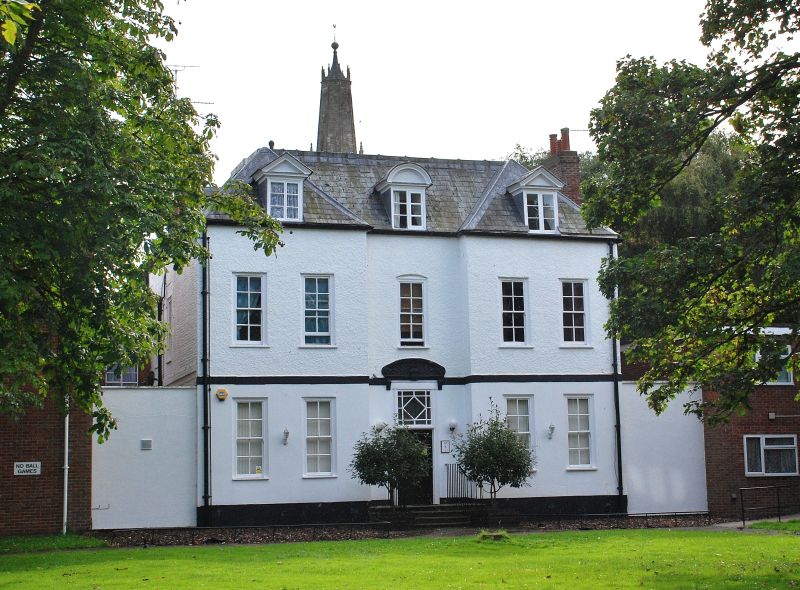 Formerly known as: No.7 ST MARY'S SQUARE.
Town house, later offices of the Deaf Institute (unoccupied
1995). c1690; C20 alterations and additions at rear. Brick
with roughcast render on front painted white, stone details
painted black, hipped slate roof with gabled dormers, brick
stacks. Main block with two slightly projecting wings flanking
the entrance and two wings at rear.
EXTERIOR: two storeys, cellar and attic; symmetrical front of
2-bay wings and a single central bay (2+1+2), stone band at
first-floor level, the former crowning cornice has been
removed. The central doorway is approached by three stone
steps and a landing between the wings; timber doorframe with a
square fanlight above the transom with glazing bars designed
as a central diamond pane with border panes; above the
fanlight and breaking the first-floor band a stone segmental
pediment supported on small moulded end brackets and its
tympanum infilled with a carved shell with a central knop and
rosettes at each end above the brackets; six-panel door, the
upper four panels fielded.
To the front of each wing on both floors two sashes with
glazing bars (2x4 panes) in openings with flat heads and
projecting sills; on the first floor in the central bay a
similar sash in an opening with a segmental-arched head; three
dormers above the front; the dormer above each wing with a
moulded triangular pediment gable and the central dormer with
a segmental gable; all with double casements with horizontal
glazing bars.
INTERIOR: dog-leg stairs with 2 barleysugar balusters per
tread and toad-back handrail; newel of 4 clustered balusters;
decorated moulded outer strings. Panelled stair hall with
fluted pilasters to fielded panels. Ground-floor room to right
has raised panelling above and below moulded dado, with raised
plain panels and matching 2-panel door and central elliptical
arch. Upper floors not inspected.