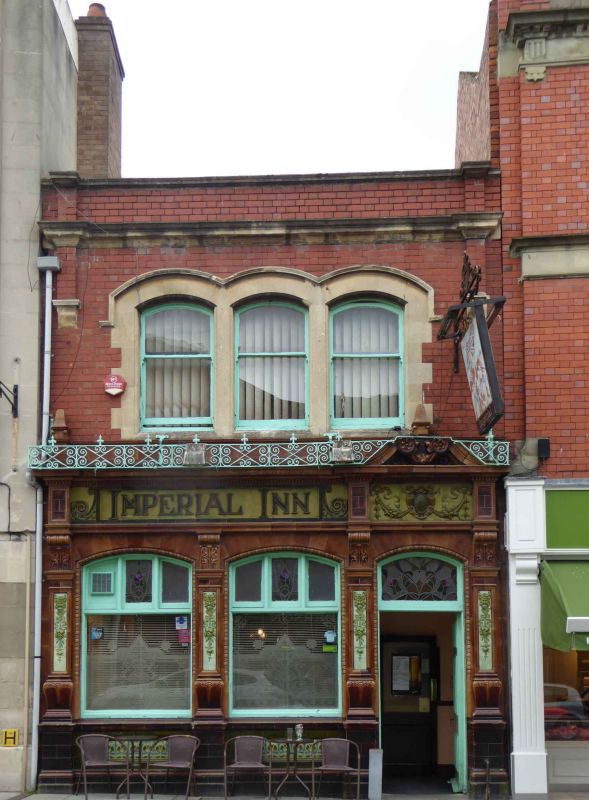 Public house. c1890. Brick with stone details, the front
partly faced with glazed tiles, slate roof. Double-depth block
with rear wing.
EXTERIOR: two storeys and cellar; on the ground floor the
front is faced with elaborately moulded and coloured glazed
tiles in three bays defined by pilasters raised on a panelled
apron with a moulded plinth and with decorative, contrasting,
tiled panels in the left and central bays; pilasters with
decorative, contrasting, moulded panels on the faces, moulded
bases, capitals and foliated brackets supporting an
entablature with a frieze framing inscription "IMPERIAL INN"
above the left and central bays and a moulded cartouche with
flanking swags in the frieze panel above the entrance doorway
in the right-hand bay; on top of the entablature a low,
decorative, cast-iron balustrade is interrupted by a broken
pediment with rosettes in the tympanum above the right-hand
bay; doorway with fanlight over transom and six-panel door; in
each of the left and central bays a window in a timber frame
with a large, single lower light and three-lights above an
upper transom; all the openings with segmental-arched heads
and moulded tile surrounds; decorative lead-light glazing in
the fanlight of the doorway and the upper central lights of
the windows.
The first floor of red brick with pilasters at either end on
moulded stone corbels supporting the moulded stone crowning
cornice; parapet above with moulded stone capping; a
stone-framed tripartite window containing three plain, horned
sashes of equal size with segmental arched heads, with plain
mullions, quoined jambs at each end, and eared hoodmould above
the arches.
INTERIOR: no original features apparent.
A fine example of a late C19 decorative tiled frontage.