Tower of the Former Church of St Michael 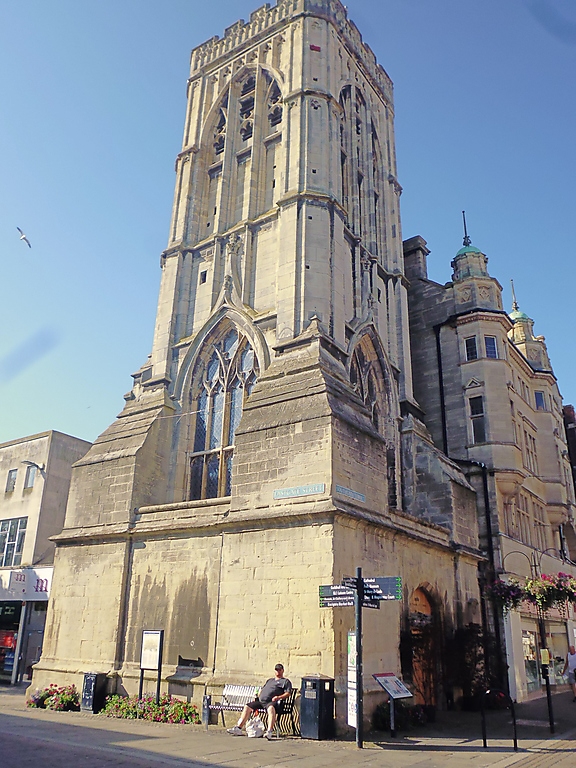 Entry Name: Tower of the Former Church of St Michael

Includes: Tower of the former Church of St Michael SOUTHGATE
STREET.
Tower of the former parish church of St Michael, now used as a
tourist information centre. Built between 1455 & 1472 at west
end of medieval church of St Michael. Except for tower the
church demolished 1849, rebuilt 1851 and demolished 1955-6,
minor alterations to tower for use as office 1980. Ashlar,
lead roof.
PLAN: a large, square belfry tower, the former entrance
doorway in the west side facing Southgate Street, the office
on the ground floor now entered through C20 glazed screen
infilling the archway between the tower and the former nave.
EXTERIOR: three principal stages; the corners with massive
offset clasping buttresses of plain ashlar capped by courses
of weathering rising to the mid-point of the central stage;
above the buttressses the angles of the tower are canted,
slightly extruded and faced with Perpendicular Gothic panels;
three bays of panels between the angles on each face; in each
of the south, west and north faces of the central stage a
large four-light window with a central transom and rectilinear
tracery, the crown of the arch capped by a gablet with carved
finial; on each face of the upper stage a large, three-light
belfry window with a central transom, solid panels below the
transom and louvres in the rectiliniar tracery of the window
arch; trefoil-headed panels in spandrels above; embattled
parapet with elaborate tracery panelling; the former pinnacles
at the corners have been removed.
INTERIOR: an elaborate lierne vault in the central stage now
concealed by a false ceiling.
Scheduled Ancient Monument.