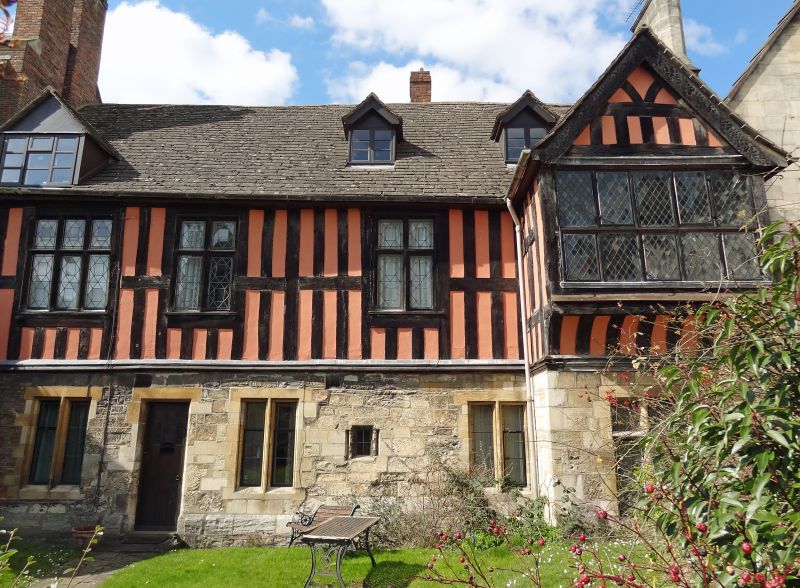 House assigned to the Prebendary of the Sixth Stall of
Gloucester Cathedral, now house and part of office.
Incorporates substantial remains of a monastic building,
possibly the Almonery of the Benedictine Abbey of St Peter.
Early C15, substantially remodelled in mid C16, C17 and C18
alterations; heavily restored and altered in late C19. Lower
storey of stone rubble with ashlar dressings, some brick,
upper storey timber-framed, the facade close-studded with mid
rail; slate roof with dormers, brick stacks.
PLAN: a long range, the upper storey probably of three bays,
originally with an open timber roof over first-floor hall; at
the northern end a cross-gabled wing projecting to front,
perhaps the oriel to former hall or a solar chamber, the wing
also projecting by one-bay at rear; the wing at first-floor
level now sealed off and part of the office in the upper floor
of St Mary's Gate (qv) adjoining to north.
EXTERIOR: two storeys and attic. On the front the ground floor
of squared stone rubble in courses except for brick panel at
the southern end; doorway to left with C19 panelled door, a
two-light stone-mullioned window on each side of doorway; to
right a similar window close to the projecting bay, between
the two windows to right a small window for the distribution
of alms; in the projecting bay to right on the ground floor a
stone-mullioned window of three-lights with an upper transom
and casements with lead light glazing; the first floor of the
range of C15 timber-framing, restored in C19, has close
studding and intermediate rail, and three restored, perhaps
late C16 or early C17, timber-framed mullioned windows with
upper transoms: one of three-lights at the south end, the
others of two lights and all with patterned leadlight glazing;
the first floor of the projecting cross-gabled bay to right is
timber-framed with jetty to front supported on a timber-framed
cove rising from a moulded timber plate; in the front of the
bay is timber-framed oriel window with an intermediate transom
(5x2-lights) and casements with diamond pattern leadlight
glazing, above the window a timber-framed gable with richly
carved barge boards. On the roof of the main range to left a
C18 gabled dormer with three casements with glazing bars and
to left at higher level two smaller C18 gabled dormers, each
with late C19 bargeboards and two casements.

At rear of the range and cross wing to left the ground floor
is of squared rubble, and first floor of timber-framing
similar to the front with the cross-wing jettied to front and
on south side; the range on the first floor has a central
three-light casement, a two-light casement to each side, all
with leadlight glazing, and a small plain sash at left; in the
gable-end wall of the cross-wing on the ground floor is a C20
three-light casement, on the first floor a C17 two-light
casement, both with leadlight glazing; on the right hand side
of the wing a C19 gabled dormer.
INTERIOR: at rear of entrance hall is a mid C18 stair,
probably moved, with closed string, column-on vase balusters,
and toad-back hand rail; on first floor landing a balustrade
with barleysugar balusters; otherwise mostly C19 fittings; on
first floor a room with C18 cornice. In the attic one-bay of
medieval former open timber roof ceiled at collar tie level;
otherwise exposed framing with double purlins, both with
stopped chamfers; between wall plates and lower purlins, and
lower and upper purlins, are pairs of chamfered, cusped wind
braces in form of cinqefoiled arches; separating the adjoining
roof bay to south an inserted C16 timber-framed partition with
close studding and intermediate rail.
(Eward S: No Fine but a Glass of Wine, Cathedral Life at
Gloucester: Salisbury: 1985-: 319; BOE: Verey D:
Gloucestershire: The Vale and the Forest of Dean: London:
1976-: 243).