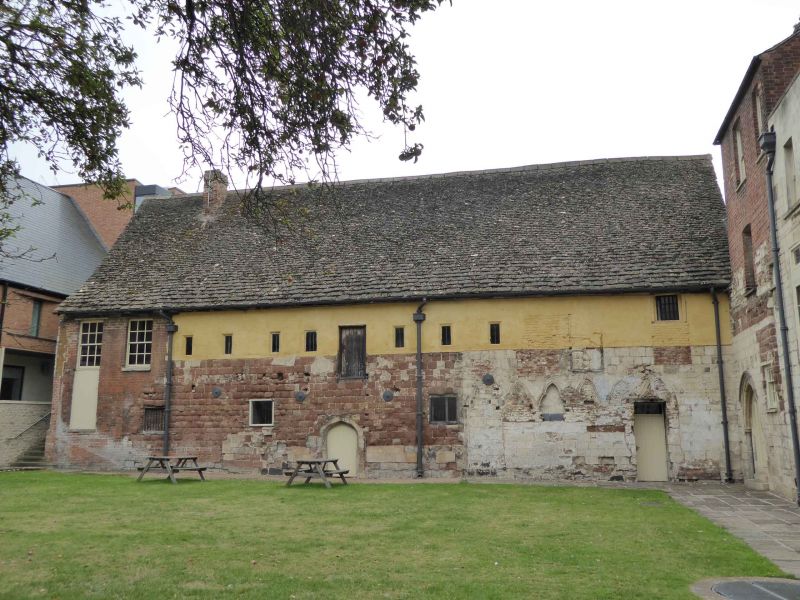 Part of Dominican friary (Blackfriars) comprising the south
range and the adjoining south end of the west range of the
former claustral buildings. Mid C13, remodelled 1540-45 for
conversion to cloth manufactory for Sir Thomas Bell; later
alterations for multiple domestic, manufacturing and
commercial use; late C20 programme of conservation by English
Heritage. Stone rubble with dressed stone features and
details, tile roofs.
PLAN: south range extends along the south side of the former
friary cloister and at its west end abuts the south end of the
west range; further north the vestigial remains of the central
portion of the west range are incorporated into a terrace of
houses, Nos 13-17 Ladybellegate Street (qqv). Originally the
south range contained the farmery at the east end and the
buttery at the west end with a long dormitory or library on
the upper floor; the west range contained the refectory.
EXTERIOR OF SOUTH RANGE: two storeys; on the north side of the
ground floor at the west end the remains of a C13 lavabo in an
arcaded recess; in the centre an arched doorway; on the first
floor a series of identical, small rectangular windows; on the
south side at the west end a large doorway with weathered
moulded jambs and arched head; further east other original and
later openings; on the first floor a series of windows similar
to those on the first floor of the north side.
INTERIOR OF SOUTH RANGE: on the ground floor a central row of
timber posts support bridging beams; on the first floor along
both the north and south walls the remains of identical
carrels separated originally by thin screen walls with
segmental, moulded arched heads over each recess;
remarkable surviving example of C13 open roof with close-set
timber trusses.
EXTERIOR OF WEST RANGE: in the south gable-end wall a stepped
triplet of lancet windows with moulded jambs and heads; in the
west wall the remains of closely spaced lancet windows with

similar mouldings.
INTERIOR OF WEST RANGE: a full height storey; the triplet of
lancets in the south gable-end wall framed in an arcade of
slender shafts with moulded capitals and bases under a wide
relieving arch.
Now part of Ancient Monument in the care of English Heritage
which includes Blackfriars Church and Adjoining remains (qv).