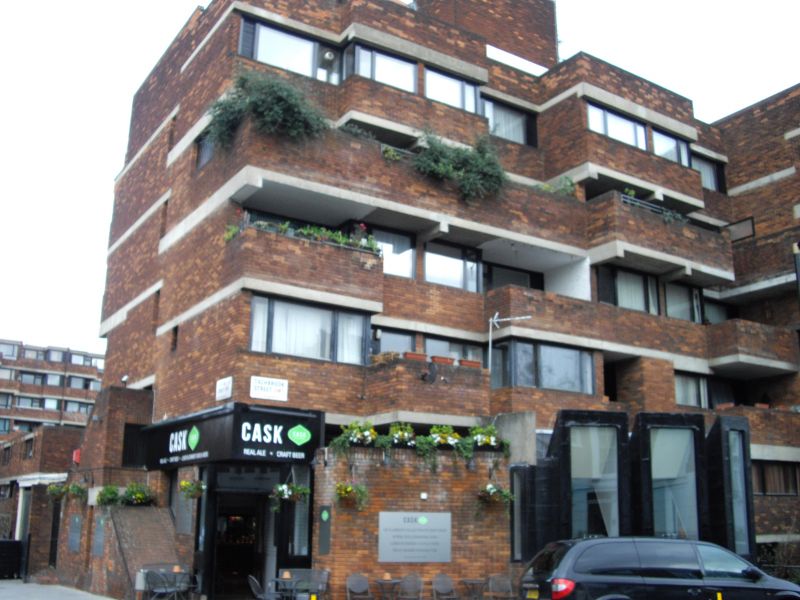 Block of sixty maisonettes, some over basement garage, with public house on corner with Charlwood Street. Design won in competition in 1961 by John Darbourne, built in 1964-70 by Darbourne and Geoffrey Darke for Westminster City Council. In-situ reinforced concrete beams and floors, exposed on the elevations and projecting balconies, and load-bearing brick crosswalls. Elevations of multi-red hand-made facing bricks, with raked joints. Flat felted roof. Complex scissor plan, particularly as the block is in two sections. Six storeys to Tachbrook Street, plus basement car park to northern section; to southern section the ground floor is below street level; five storeys to garden front. The plan of maisonettes is similar in both sections, but northern section raised over garage. Lowest level reached from Tachbrook Street, those in northern section reached via raised walkway. Thus access gallery to upper flats is on third floor of northern section, but second floor of southern. Both have broad planting trough along their length. The block is also stepped, following the line of Tachbrook Street. Most maisonettes with three bedrooms, those on ground floor include some with four bedrooms and all have private gardens; some of those on upper level with roof gardens. Large double height opening into gardens at north end of block, which shares a dog-leg stair with Repton House (q.v. Charlwood Street). The two sections linked by shared lift lobby and stairs. The elevational treatment is in the distinctive Lillington Gardens idiom, here done particularly powerfully. Northern section has blind brick wall on ground floor to Tachbrook Street. Every pair of units, approximately, steps forward along line of street. The middle maisonettes with balconies. Stepped elevations seen also on the gardens elevation, which masses towards corner with Repton House with more overhanging floors. Projections at fourth floor level with overflow shutes in the style of Le Corbusier's Maisons Jaoul in Paris, a popular motif at the time. The change in levels between the two halves of the block is seen particularly clearly on this elevation, and in the southern section the projecting floor is the third. Dark stained timber double-glazed windows (original), with vertical opening casements. All doors originally also of black stained timber, and most remain. Public spaces lined with brick paviours, and with shallow brick walls to the planting troughs. Staircase rises in long flights from high lift lobby with timber balustrade. Original metal signage of black lettering on silvered backgrounds. The garden walls, some with timber balustrades, and black stained gates, are an important part of the composition. Interiors of dwelling units not of special interest. Pimlico Tram. Pub on corner of Charlwood and Tachbrook Streets, under the north end of Forsyth House. Single bar, with large timber window to Tachbrook Street. Single bar. Though a single room, separate spaces are defined by two central columns and by changes in ceiling height. Angled glass brick clerestory. Boarded timber ceilings to lower areas. Angled supports to main window where concrete supports are boxed in. The pub is lined in timber boarding, vertical to main space, horizontal and varnished to corner snug. In the lowest part of the room is the bar, with curved corner counter clad in vertical pine boarding. Main bar also original with fine counter stand, complete with fretwork and sign 'Welcome to the Pimlico Tram'. It is an unusually complete survival of a 1960s public house interior, at once modern but with traditional materials. John Darbourne won a competition for the rebuilding of Lillington Street in 1961, and formed a partnership with Geoffrey Darke to develop the scheme. The design of Lillington took its cue from the important (grade I listed) Church of St James the Less, with its striking Victorian red brick, which the estate surrounds. Architects like James Stirling and James Gowan at Ham Common, Richmond; Leslie Martin at Cambridge University and Basil Spence at Sussex University, Brighton, had begun to explore ways of using a combination of brick and concrete, but not on such a scale or with such intensity of colour and complexity of form. Martin and his proteges had also begun to theorise the possibilities of low-rise high-density housing in their Bloomsbury project and in their college work at Cambridge, but Lillington was the first low-rise, high-density public housing scheme to be built. As the first example of low-rise high-density housing, Lillington Gardens was epoch making. 'The blocks are more reminiscent of the college campus than of municipal tenements' (Architects' Journal, 1 July 1970). It influenced the style of council housing from the mid-1960s until the early 1980s. 'An elegant and exciting environment for young and old' (The Times, 13 September 1972). Forsyth House lies partly in Phase I and partly in Phase II of the development, but in style and planning is broadly consistent despite changes in levels.