Church of Our Lady of Fatima 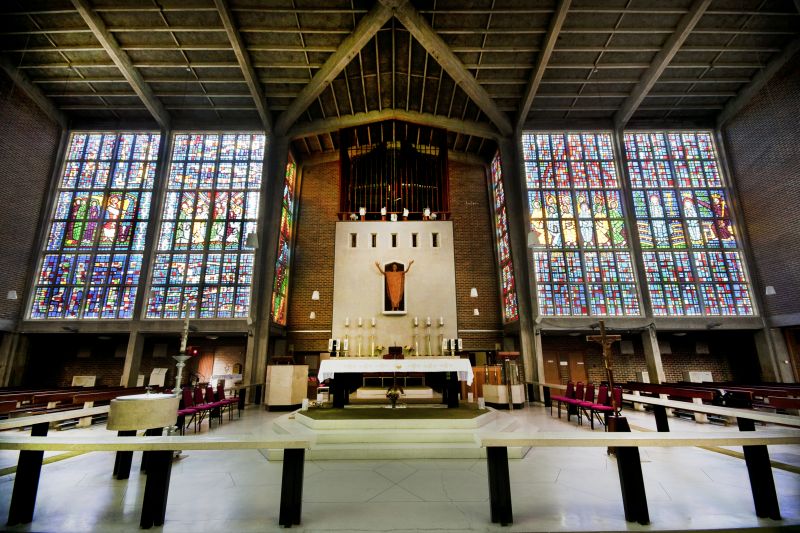 Entry Name: Church of Our Lady of Fatima

Roman Catholic parish church. Designed 1953-4, built 1958-60 to the designs of Gerard Goalen. In situ reinforced concrete. Aisle walls and the end walls of the naves and transepts of Surrey stock bricks. Roofs of wood-wool slabs supported on precast concrete purlins and clad in copper, with concrete and asphalt for the aisles. Central spire of plywood sheathed in copper.

`T'-shaped plan of almost equal arms, each with a narthex and aisles, and whose central crossing is filled by a large apron-shaped sanctuary. Weekday chapel in former sacristy, and present sacristy in former working sacristy and vestry, to the rear.

End walls with double doors and lobbies, the outer doors and flanking glass panels with square hardwood glazing bars. The chief decorative feature is the slab and fused slab glass set in concrete, designed and made by Dom Charles Norris OSB of Buckfast Abbey, assisted by Paulinus Angold and Jerome Gladman. End walls all with rose windows, the other glass more figurative and depicting the fifteen mysteries of the Rosary in the transepts; the slightly later (1961) glass in the nave shows Our Lady of Fatima (Portugal, 1917) and the Tree of Jesse. Stations of the cross grouped in the aisles, made of Hopwood stone by Mrs Foord-Kelsey. Memorial to Father Francis Burgess, incumbent 1953-72 under the foundation and dedication stones. The sanctuary projects rather like an apron stage, with an altar and altar rails of Roman marble supported on black Belgian marble columns. The only change to the sanctuary fittings has been the removal of a tester from over the altar. Behind is the organ, by N P Mander Ltd., whose pipes are set over a pierced mosaic screen containing a figure of Christ, King and Priest by Daphne Hardy Henrion. Terracotta figure of Our Lady of Fatima by Mrs Scott Pitcher. Tabernacle designed by Goalen and made by John Grenville; high altar candlesticks and cross also designed by Goalen and made by Anthony Hawksley. Streamlined bench pews set round the sanctuary on three sides.

The presbytery, to which the church is joined by a cloister, is not of special interest.

In 1952 the New Town was divided into three Roman Catholic parishes. The first of these was entrusted to a religious order - the Canons Regular of the Immaculate Conception - and land was granted by the Development Corporation close to the site of the town's first shopping centre, The Stow. Father Francis E Burgess was appointed parish priest, serving until 1972. A church hall and a primary school were quickly built, respectively to the designs of Sperry and Starczewski, and of E A Boxall. In 1953 the design of the church was entrusted to Gerard Goalen, then working for the Development Corporation. Father Burgess's brief was for a church capable of holding up to 500 parishioners, set as close as possible to the altar. The sanctuary was to be generously sized, and the altar was to be free-standing. This was a radical brief for 1953, and if funds had been available to start building when the plans were approved, in January 1954, this would have been the first post-war church in England built under the auspices of the Liturgical Movement. A model of the church was exhibited at the Royal Academy in 1956. The foundation stone was laid on 6 December 1958, and the church was opened and blessed by the Bishop of Brentwood on 26 March 1960. Thus, despite the delays it remains one of the first liturgically-planned churches in England. It was the first to combine this with modern glass, already so popular in France, Germany and Switzerland, where Goalen had travelled extensively. The church was extremely influential, and led to Goalen setting up in private practice designing Roman Catholic churches and schools across England.
Sources
Gerard Goalen, `A Place for the Celebration of Mass' in guide to Our Lady of Fatima held at the church.
Gerard Goalen, `The House of God' in Church Buildings Today, October 1960, pp.3-4
Liturgical Arts, 1961, pp.68-71
Information from Martin Goalen
Elain Harwood, `Liturgy and Architecture', in Twentieth Century Society Journal, no. 3, 1998, pp.51-74