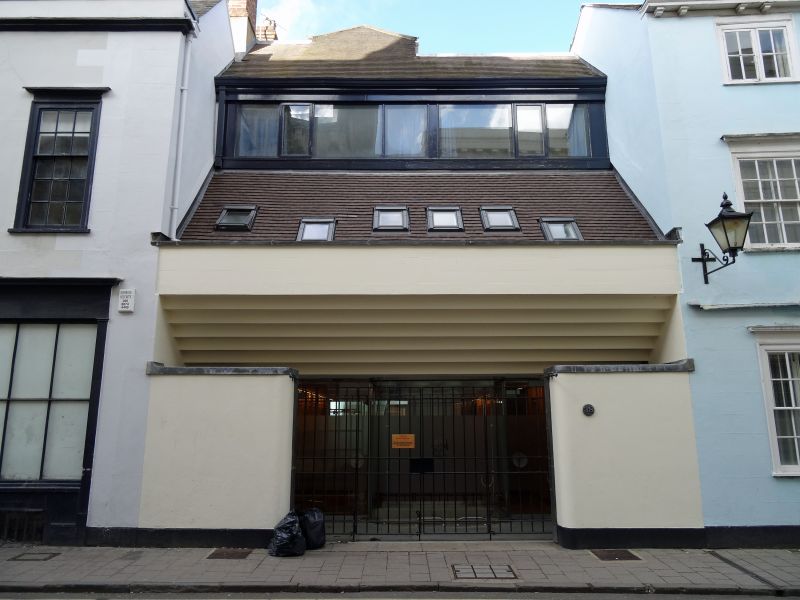 Ground-floor and basement shop facing Holywell Street, with two storeys of student accommodation on upper floors behind. The deep plan of the rebuilt shop forms a terrace in the College gardens, with lightwells giving natural light down into the basement of the bookshop, and lighting a sunken courtyard, Fellows' Court, set behind the rear of the King's Arms (already listed).

Free vernacular-inspired design. Long strip clerestory window with side-opening casements. Two-stage roof to front, the lower ridge incorporating irregularly-placed rooflights. Timber windows to upper storeys. Ground floor set below deep, fluted concrete lintel, with concrete panels flanking floor to ceiling shop window with tinted glass, which incorporates a light-well to basement and a steel grill for security. Another lightwell to the rear of the shop gives more natural light to basement and forms a strong visual feature. Light black steel windows, and doors into stone-paved courtyard. The rear elevation is rendered and is Georgian in character. Behind the shop is a flat slab forming a terrace within the grounds of Wadham College, which overlooks this lightwell, and to the side an enclosed set of accommodation, called Holywell Court. The rooms give on to a central sunken courtyard, with stone paving, and have elevations lined in lead with heavy metal window sections and repeated clerestory strip. Holywell Court has Douglas fir boarded ceilings, and varnished oak doors internally. Oak bookshelves, designed by the architects, line the walls of the bookshop, which also features some York stone paving.

Blackwell's Music Shop was opened on 9 November 1970 by Sir Adrian Boult. Gillespie, Kidd and Coia were consultant architects to Wadham College, who owned the site, and this is the most public element of their extensive works for the college. The building has wit and imagination in responding to a tight site of international historic importance. The result is a notable landmark to Holywell Street, with a compact and elegant terrace and courtyards to the rear, and a distinctive and unusual building from this remarkable practice. `It fits in while having a real personality of its own' (Architects' Journal, 17 January 1973, p.151)