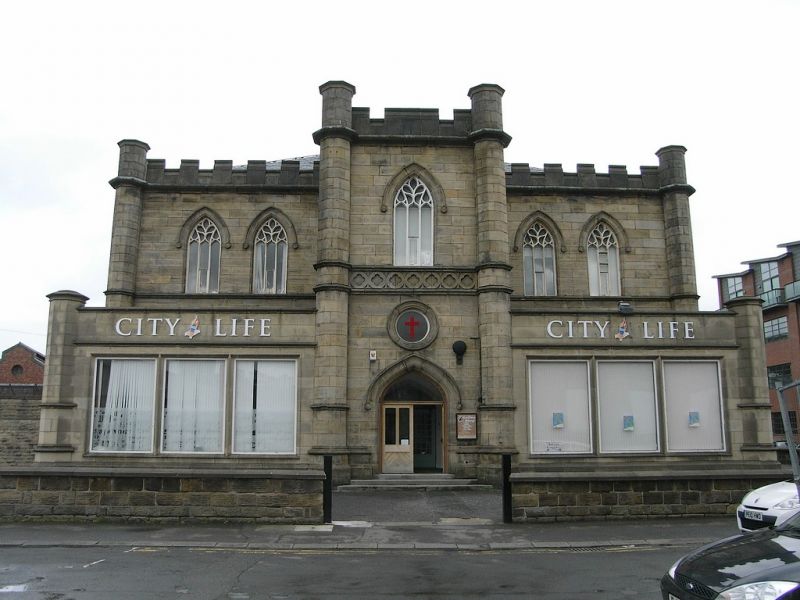 Formerly known as: Ebenezer Wesleyan Chapel SOUTH PARADE.
Methodist chapel and adjoining Sunday school, now warehouse.
Dated 1823, Sunday school dated 1883, additions early C20.
Coursed squared stone with ashlar dressings and hipped and
gabled slate roofs with single ridge, gable and side wall
stacks. Chapel in Gothick style.
EXTERIOR: plinth, string courses and sillbands, crenellated
parapet. Octagonal corner piers, carried above the parapet,
with flat caps. 2 storeys; 5 x 6 windows. Windows are
traceried 3-light pointed arch windows with hoodmoulds. Main
body with west tower porch and flanking lobbies. West end has
central tower porch with octagonal corner piers and a
latticework band between floors. On each side, a single
window. Beyond, on each side, 2 windows. Below, central
chamfered pointed doorway with hoodmould and above it, a round
window. On either side, a single storey lobby, now used as a
showroom, with octagonal corner piers and parapet. 3 large
single pane C20 windows, with stone mullions between them.
Each return has a similar window with toplights.
Main body has on each side, 6 windows on each floor. The 2
lower north-west windows are covered by a late C19 addition.
Late C19 additions have steep pitched slate roofs with coped
gables. North-east addition, single storey; 4 window range.
L-plan. Left gable with 2 glazing bar 2-light pointed arch
windows with hoodmoulds and above them, a round window. To
right, 2 single light windows with transoms, and to their
right, a blank. West gable has a round window with hoodmould.
South-east addition, 2 storeys; 3 window range. 3 glazing bar
windows with transoms and central doorway with overlight and
hoodmould, flanked by similar windows. West gable has 2 large
2-light pointed arch windows with hoodmoulds and below, a
large canted bay window with hipped roof and 4 shouldered
single lancets. Rear elevation has a central gable with 2
windows on each floor and to left, a 2 storey block; 3 window
range. To left again, a projecting gable with 2 windows. To
right, a single bay range with C20 loading door and 2 windows.