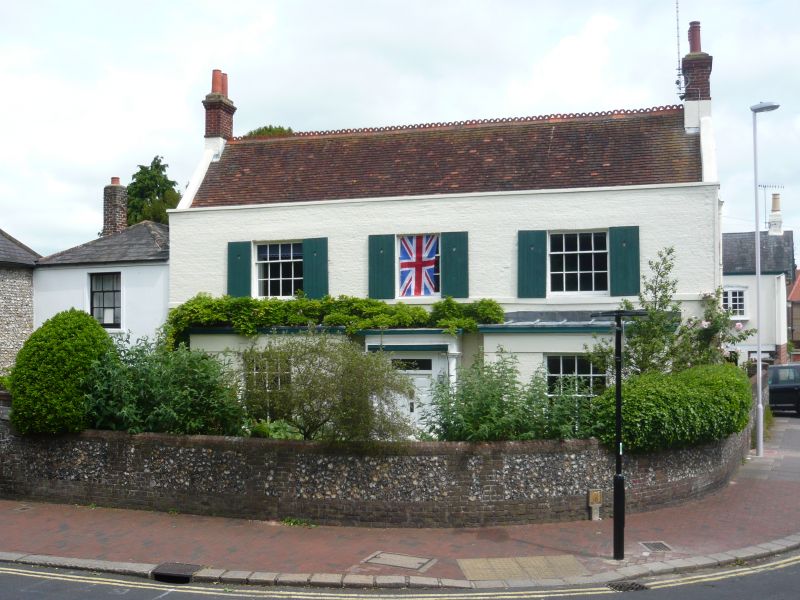 BROADWATER STREET EAST
1.
5406
(North Side)
Broadwater
Nos 27 and 27A
TQ 1404 16/206
II GV
2.
Probably mid C18, but with later modifications. On the corner of Forest Road and
abutting No 25 on the west. 2 storeys. South front: Symmetrical. Painted brick.
3 sash windows, the middle one narrower. The upper ones have gauged heads and glazing
bars. The lower side ones are set in wide projections under flat lead roofs and
have glazing bars in upper sashes only. Central door with 6 moulded, fielded panels,
enclosed by 3/4 Tuscan columns supporting entablature and parapet. Steep-pitched
roof, tiled on north side, slated on south with decorative tile cresting. Gable
chimneys. 2-span, lower wing at west end of rear, with steep, tiled roofs and tall
gable chimneys. Rendered and painted. Irregularly-placed sash windows with glazing
bars. Single-storey lean-to extension at east end of rear (and small 2-storeyed,
flat-roofed section between this and rear wing).