A Grade I Listed Building in Brenchley, Kent 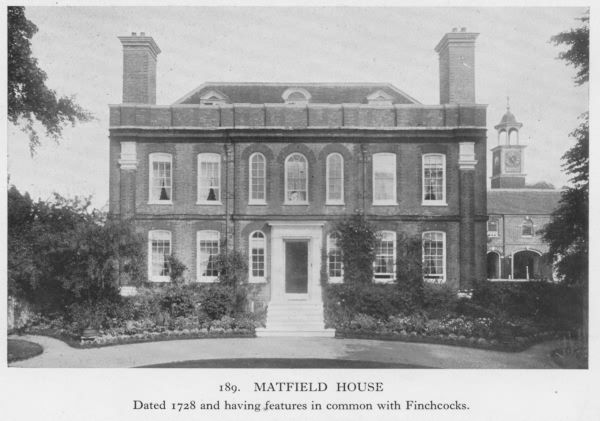 GV
I
House. 1728 (dated rainwater heads) with circa early C20 rear wing. The 1728 building has been described as "evidently the work of the same architect- builder who designed Finchcocks near Goudhurst". (1949 List Description). Brick on sandstone ashlar footings; peg-tile roof with a central valley and lead rolls; brick stacks. The colour and coursing of the brickwork varies, red brick dressings. The later wing is brick to the ground floor and tile-hung on the first floor.

Plan: the 1728 block faces south, overlooking Matfield Green. It is double depth, two rooms wide with a central entrance into a rear centre stair hall with a fine open well stair. Position of original services not clear on survey (1989) as interior not inspected. They may have been in a rear wing or perhaps in the basement. Rear right wing at right angles described as "of recent years" in 1949 (List Description) with various rear additions.

Exterior: very handsome. Two storeys. The front elevation is in pink brick laid in Flemish bond with red brick dressings and rubbed red brick-arches. The sandstone footings rise to the level of the half basement. Symmetrical seven bay south front, the centre three bays slightly broken forward. Left and right pilasters with moulded capitals and bases, moulded brick cornice at first floor level, deep moulded brick cornice below staggered parapet with a stone cornice. Roof hipped at ends, end stacks with moulded cornices to the chimney shafts. Six stone steps up to an C18 style recessed two-leaf front door with fielded panels, panelled reveals. The doorcase has reeded pilasters and an entablature with a triglyph frieze, guttae and mutules. The bays to left and right of the front door on both floors have tall round-headed 12-pane windows. First floor centre window is a round-headed 18-pane sash, the head with spoke glazing bars. The other windows are 18-pane sashes with segmental arched heads. The basement level has square-headed glazed openings to left and right of the front door and segmental-headed recesses to the other bays, one glazed. Three first-floor attic dormers behind the parapet, the outer dormers pedimented with lead roofs, the centre dormer with a segmental arched lead roof. Two original lead downpipes, the rainwater heads dated 1728, the fixing brackets stamped with heraldic devices.

The left (west) return of the main block is red brick with blue headers has a shallow stack and a plain parapet with a moulded cornice that ramps up to the shaft of the chimney. One first floor 18-pane sash with a segmental arched head. To the left there are steps up to a garden door, the upper half-glazed with12 panes with one large fielded panel below. The door has a top-hung six-pane overlight and a segmental rubbed red brick arch over. The rear elevation of the C18 block is English bond brick with blue headers and red stretchers. There is a first floor six-pane casement with a four-pane overlight and a rounded-headed stair window with small panes. A flat-roofed C20 addition adjoins at the rear left with sash windows, a moulded brick cornice at first floor level and deep eaves with a moulded eaves cornice. Panelled door with a horizontal hood, all in an C18 style. The right (east) return of the C18 block has a blocked doorway and first floor 18-pane segmental-headed sash. To the right, the C20 extension, slightly set back, is in a loosely C18 style, the first floor tile-hung. Front door with fielded panels and steps up with a porch hood on brackets. Sash windows of various designs including tripartite sashes. Three first floor dormers with hipped roofs, two with tripartite sashes. The west side of the wing is in similar style.

INTERIOR: not available for inspection at time of survey. Original joinery known to survive. Fine early C18 open well stair (photographs in National Monuments Record) with ramped wall panelling with fielded panels and Ionic pilasters. The open string balustrade has a moulded ramped handrail, floral brackets and three balusters to each tread, one iron twist, one barleysugar and one fluted, each on vase bases with Ionic capitals. Other features of interest likely to survive.