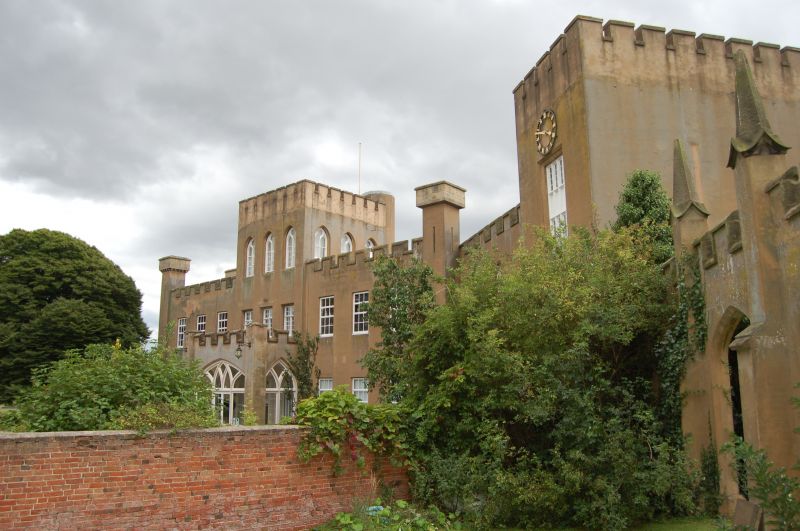 G.V. II
Country house, now school. C17, C18, largely rebuilt C19 for
Pendock Neale Barry, C20 extensions. Render, some ashlar. Roof
hidden by parapets, but with single central tower. Set on a
plinth. Entrance front 9 bays, 2 storeys to outer bays and 3
storeys to central 3 bays. The outer 3 bays on each side are
embattled and have outer single slightly projecting turrets each
with 3 arrow slits and slightly projecting top supported on a
corbel table. The central 3 bays slightly project and have an
ashlar parapet. Central 3 bay single storey embattled porte-
cochere with single outer embattled turrets. The Gothick arched
lights are now part glazed with central doorway. Inner doorway
with C20 door and pointed arched overlight flanked by single
engaged octagonal piers with moulded capitals and band extending
between the capitals. Either side are single pointed arched
windows each with pointed arched fixed lights and tracery. To
the right and left of the porch are 3 glazing bar casements.
Above are 6 similar smaller casements with 3 glazing bar cross
casements in the central 3 bays. Over are 3 pointed arched
Gothick glazing bar casements. To the right, slightly set back
and at an oblique angle is a lower two and a half storey, 3 bay
embattled wing. 3 round arched recessed panels each with single
round arched casement alternate with 2 buttresses. Linking the
buttresses and extending across the whole of this front is a
chamfered band. Above are 3 similar casements. On the top floor
are 3 casements. Further right and slightly projecting is a
diagonally buttressed 2 stage clock tower with ashlar parapet.
The lower stage projects slightly and has a double chamfered
carriage archway. Over is a single quadripartite casement with 2
transoms and above a single clock face. Attached to the right is
a wall linking the house to the church and listed as a separate
item. East and south fronts also with turrets. East front with
some arched openings, single window with Gothick glazing bars.
South/garden front with 3 storey canted bay has various sashes
and casements. Projecting from the left of this front is a C20
extension. Interior. Decorative rib vaulted entrance hall with
pendant centre. Reveals to doorways and windows of hall have
Gothick blind panelling. Inner doorway also with Gothick
panelling. Room to left of main entrance with Ionic columns and
decorative ceiling and cornice. 2 further rooms with
decoratively carved ceilings and cornices and further single room
with carved cornice. Tollerton Hall was renamed Roclaveston
Manor by Pendock Neale Barry.