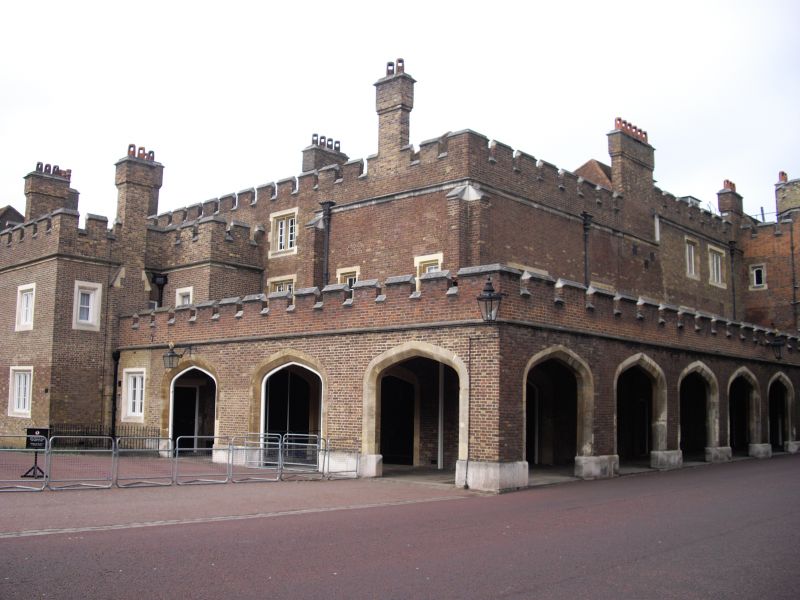 TQ 2979 NW and CITY OF WESTMINSTER ST. JAMES'S STREET SW1
2980 SW
81/118 ; 90/3 St James's Palace,'
5.2.70
GV I
Palace. Built c. 1533-35 for Henry VIII on the site of the hospital
of St. James with extensive later additions and alterations. Tudor
brickwork with diapering and stone dressings; slate, tile and lead
roofs. Later buildings mostly in Tudor style with crenellated
parapets. Built round 4 courts. North range (facing St. James's Street)
irregular 3 storey ranges, forming north sides of Colour Court and
Ambassadors' Court; Tudor gatehouse with polygonal corner turrets and
4 centred archway through to Colour Court. Square headed stone Tudor
windows with 3 arched lights. Tudor north window of Chapel Royal
remodelled with multiple lights. 4 centred stone archway to
Ambassadors' Court. Later C17 and C18 alterations for recessed glazing
bar sash windows with flat gauged arches and Tuscan porch to west end
return. Colour Court has remains of Tudor ranges in north half of
quadrangle with corner stair turrets, C16 building on east side.
On west side, flanking lower part of the Chapel Royal, is a Tuscan
colonnade of c. 1717-18. The Chapel Royal, between Colour Court
and Ambassadors' Court, has a college chapel-like T plan and dates
from the 1530s, largely redecorated c. 1836, but the panelled ceiling
with painted Renaissance motifs dated 1540. Friary Court to the south
has buildings of Tudor origin in the north west corner, including
original stone mullioned-transomed oriel bay window to the Armoury
Room on 1st floor. The Court was reduced in extent to the east
after a fire in 1809 and rebuilt with 4 centred arcades in yellow
brick, returned to Marlborough Road. Engine Court to the west has
ranges of C17 and later buildings with the late C17 and Queen Anne
State Apartments by the Office of Works under Sir Christopher Wren
on the south and the Banqueting Room to the north. The South range
of State Apartments facing St. James's Park are of c. 1703. 3 storey
elevation with basements. 17 windows of which 2 westernmost bays are
facsimile additions. Red brick with rubbed dressings. Ground floor
flush framed glazing bar sash windows with flat gauged arches. Tall
1st floor windows,to main apartments,architraved and with cornices;
2nd floor level with blind window panels, crenellated parapet. Lead
rainwater heads embossed with lions' heads. Ambassadors' Court to
the west as originally 2 courts,thrown into one. Irregular 2
storey and 3 storey C17 ranges, 5 bay range to south with rainwater
heads dated 1697 and west of it the former State Kitchen of c. 1716-19
probably by Vanbrugh (with vaulted interior) and western extension of
similar date. The north side of Court to the West is of late C17 build
with architraved sash windows and early C19 Tudor arcading across
ground floor. State Apartments interiors: main access to the apartments
is through the south west corner of the Colour Court by a grand scissors
staircase, an enlargement of the Wren staircase in the early C18 with
a Kentian arch between the two parts. The Banqueting Hall west
of the staircase was redecorated 1821-23. The Guard Room to the east has
Tudor walls and a Tudor fireplace. The Armoury and Tapestry Rooms
retain their Tudor fireplaces and were redecorated by William Morris
and the firm in 1866-67. Beyond are the Wren State Rooms with
alterations,by William Kent,in 1821-23,and again for William IV. The
Throne Room overmantel is carved by Grinling Gibbons. At the west end
of the range is a fine secondary staircase with wrought iron balustrade
by William Kent. NB. See also under Stable Yard.
History of the King's Works
London, Vol I; N Pevsner.