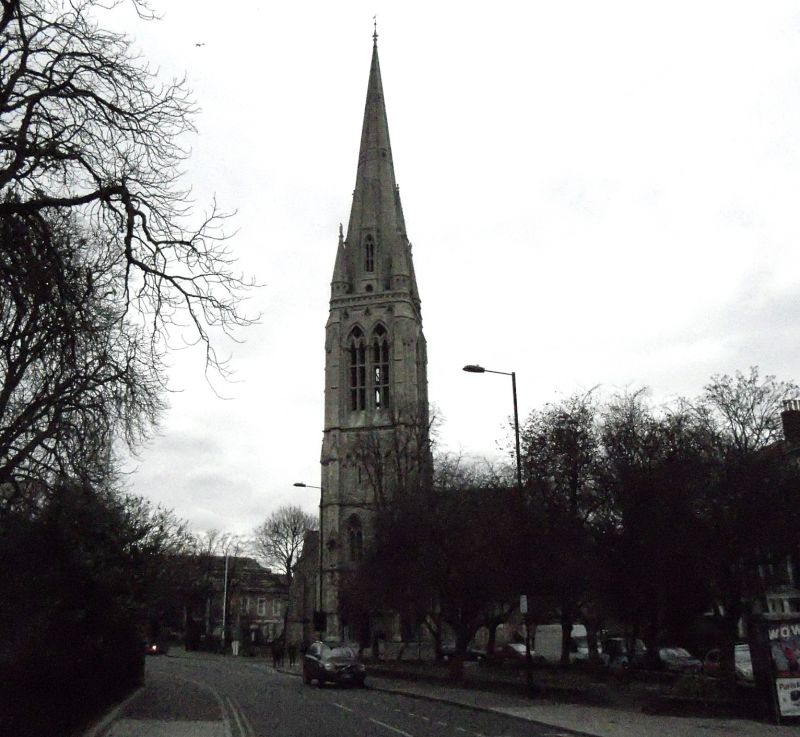 GV II*
Parish Church. 1858 by George Gilbert Scott, with spire completed in 1890 by his son, J.O.Scott. Restored after WWII by N.F. Cachemaille-Day.
MATERIALS: Coursed rubble with freestone dressings.
PLAN: A cruciform plan with aisles, a west tower and apse at the east end. The porch is to the south and there is also a large entrance at the base of the west tower.
STYLE: In the Decorated style of the late C13/early C14 as made popular in the mid-C19 by Pugin and the Ecclesiologist Movement.

To the north-east, the parish vestry by J Oldrich Scott (built at the same time as the spire) abuts the church. This is partially enveloped by a series of parish rooms of 1995 by Rebecca Cadie and Gordon Fleming.

INTERIOR: Lofty nave of five bays with aisles and naturalistic stiff-leaf capitals to the aisle arcades. Slender king post roof structure with tie-beam and quatrefoil spandrels and the crossing; the aisles have simple tie beams and 4 cut out lancets of diminishing height. The west tower leads into the nave with a bold pointed arched opening of three orders, with the same rich capitals. The two-bay chancel is even more lavishly decorated with angels around the intrados of the arcade arches and trefoil windows in the clerestory. The crossing has compound piers and a quadripartite vault and the nave has a king post timber roof with queen struts. The north porch entrance is fairly plain internally with a simple hood-mould with carved heads at the stops the only embellishment.

FIXTURES & FITTINGS: Include 1908 reredos, font by R. Westmacott, pulpit, altar-piece with deeply carved Last Supper, organ in the N transept, and post-war stained glass with apse windows by Francis Skeat 1957-8 and N transept by W. Carter Shapland, 1960. There are also two early-C20 wall monuments in brightly coloured mosaic designs. The pulpit and font are particularly fine, combining stone and marble elements with rich carved details, of Christ and the four gospel writers in the pulpit and four angels in the font - both are very much of a piece with the church.

HISTORY: The C19 movement to build new churches in areas of underprovision was particularly strong in Stoke Newington where a group of enthusiastic churchmen, the Stoke Newington and Hackney Church Association, pledged in 1854 'that the object of the Association be the Glory of God in the extension of His church by all lawful means'. St Mary New Church, situated directly opposite the small Tudor church it replaced (St Mary's Old Church, also grade II*), is an exemplar of this mid-C19 period of building. It was built in 1858 by Sir George Gilbert Scott although the spire was not completed until 1890, by J.O. Scott. After the war, N.F. Cachemaille-Day (church architect for Hackney and responsible for several rebuilding campaigns in the borough) repaired sections damaged by enemy action and the church was reopened in 1957.

The church is in the Early Decorated style which was fashionable in the mid-C19 with the Ecclesiologists, who sought to introduce elaborate liturgy to services and emphasised the beauty and glory of C14 religious buildings. This style was inspired by the publication of Pugin's 'Contrasts' in 1836 which derided the austere Early English idiom of early-C19 buildings and encouraged architects to pay greater attention to C14 architectural elements such as tracery windows, stained glass, striking towers and spires, and a pronounced chancel.

SUMMARY OF IMPORTANCE: St Mary New Church was built in 1858 by Sir George Gilbert Scott with the spire completed in 1890, by J.O. Scott. It is worthy of designation at a high grade for its exceptional Early English inspired architecture, including an impressive spire, elaborate chancel, and very high-quality carved detail and geometric tracery throughout. Externally, the church's composition is on a monumental scale and its craftsmanship is of the highest quality with elegantly carved details in key elements such as the tower and porch. Internally, this is a lavish church, with careful consideration given to the stone carving on the arcade and in the chancel and to the sumptuous font, altar-piece and pulpit. The liturgical and historical tastes of the Ecclesiologist Movement, which emphasised the beauty and glory of C14 religious buildings, are manifest in its architecture. The church also has group value with the grade II* St Mary's Old Church. The two make a memorable contrast and are a striking visual representation of the demographic changes from the C16 to the C19 in this area.