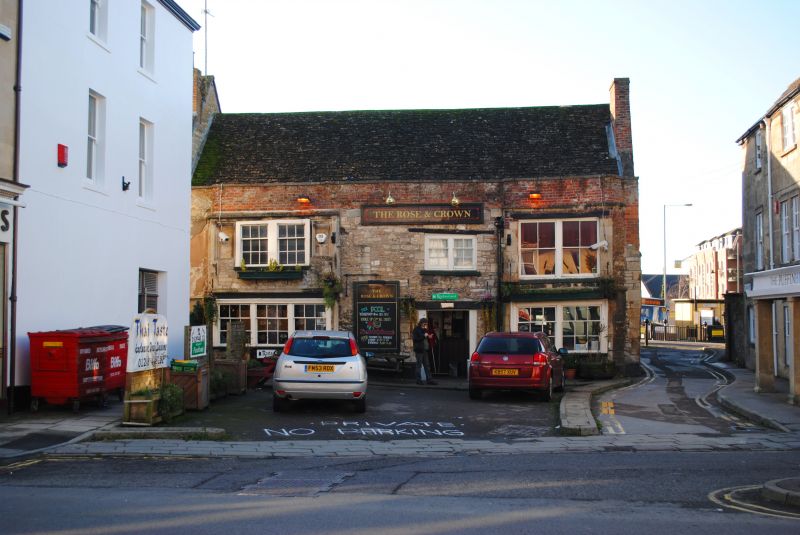 Public house. C14/C15, floor to hall inserted C16; most of
original timber-frame replaced by stone walling in C17; early
C19 left wing and late C19 stables. Limestone rubble,
freestone plinth and dressings and C18 English-bond brick
coped parapet, stone slate roof with brick stacks to the right
gable end, centre-ridge and rear gable end of rear wing.
Ashlar left wing with double-Roman gambrel roof.
PLAN: medieval 2-unit through-passage plan with rear right
wing and early C19 left wing.
EXTERIOR: 2 storeys; 3-window range. To each side are
slightly-projecting early C17 bays with drip-moulds over
timber lintels to former stone-mullioned windows; that to the
1st-floor left retains some hollow-moulded mullions to a 6 or
7-light window, now blocked with C18 paired 3/6-pane sash
windows in forward frames; a triple window below has similar
sashes. The narrower right-hand bay has similar paired windows
to the ground floor and C19 horned 2/2-pane sash windows
above. Over the right-of-centre C20 double doors is a timber
lintel to a C20 window. The parapet follows the contour of the
facade. The gable end of the right return in Lords Lane has
exposed timber-framing to the 1st floor including a blocked
5-light window with chamfered mullions and a stepped
corbelled-out rubblestone base to a reconstructed external
1st-floor brick stack. The projecting ground floor is
weathered and contains a later stack to the ground floor.
The rear right wing in Lords Lane has a central ridge stack,
timber lintels to a leaded 2-light window to the 1st floor
over a C19 triple 2/2-pane sash window with an ashlar apron,
possibly formerly wide doors. The quoin to the north-west
corner changes above the 1st floor and an exposed cruck to the
south-west gable end with a shallower pitched roof above
implies a re-fronting of a former timber-framed structure.
mortices for purlins in the cruck suggest that the wing is
truncated. It is said that the entrance was formerly to the
present rear.
The early C19 left wing has a yellow brick stack to the front
slope of the right gable end, platband, C19 paired 3/6-pane
sash windows to the 1st-floor right, a C20 simulated 3/6-pane window to the left is blocked below the sill, probably a
former loading bay. 3 similar C20 windows to the ground floor.
To the left is a chamfered architrave to a blocked door. The
left return is plain with C20 timber stairs to the 1st floor.
Stable block: attached to the rear is a mid/late C19 L-shaped
stable range forming a courtyard to the left. It is of
rubblestone with brick architraves and a double-Roman tile
roof. A repositioned datestone of 1694 may mark the date of
refronting with bays.
INTERIOR: there is evidence for a former medieval
timber-framed hall house. The through passage, screened to the
right, is flanked by chamfered beams. That to the right has
holes for wattles toward the front and slots, probably to a
former plank-and-muntin screen, to the rear, supporting the
theory that the entrance was once at the front.
The service end to the right has rough flat joists to the
floor of a 1st-floor heated solar, the C17 chimney-breast of
which is corbelled out in Lords Lane. The C16 joists of the
former hall to the left imply that this was floored later.
A main roll-stopped chamfered cross-beam, formerly supported
by the timber-frame, is suspended behind the C17 bay window.
Front range, including medieval hall, is known to have cruck
roof (access not possible).
(Chamberlain, Joseph A: Chippenham: Chippenham: 1976-: 112).