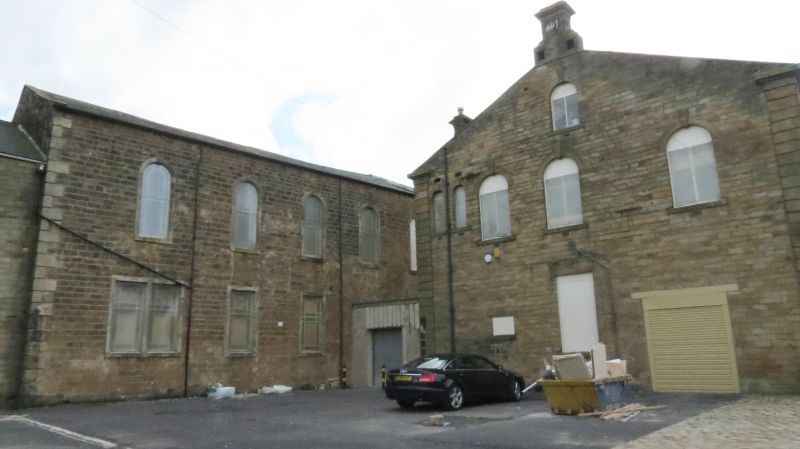 Includes: No.2 HEBREW ROAD.
Baptist Sunday School converted to institute, with integral
dwelling; and added chapel (replacing chapel formerly on
opposite side of road, built 1787) now church. 1845 and 1860
respectively; altered and the church extended to the rear.
Mostly coursed squared sandstone, the institute watershot and
the church ashlar-faced, with rusticated quoins to both parts,
hipped stone slate roof to institute and slate roof to church.
PLAN: L-plan formed by the original range on an east-west axis
incorporating the dwelling at its east end, with the church as
a projecting crosswing at the west end.
EXTERIOR: the institute and dwelling is a mostly 2-storey
range, 4+1 windows, with a band over the ground floor, a
1st-floor impost band, and stone gutter brackets. It appears
to have been shortened at the west end, the openings of the
former school forming a symmetrical set markedly offset to the
left, those at the left end being very close to the junction
with the church. At each end of this set is a tall
square-headed doorway at ground floor, with a square-cut plain
surround, a 9-panel door with glazed top panels, and a square
overlight, and a round-headed window at 1st floor; in the
centre are a pair of rectangular windows at ground floor and a
pair of tall round-headed windows above, and between these a
datestone at ground floor with raised lettering "SABBATHSDAY /
SCHOOL / 1845" and a re-set triangular-headed datestone set on
the band and inscribed "EBENEZER / ERECTED / 1787"; and the
ground floor also has an intermediate pair of smaller windows.
The continuation to the right (No.2 Hebrew Road) is divided
into 3 storeys, with altered openings at ground floor and one
window on each upper floor, both breaking the bands.
The church to the left, rectangular and of 2 slightly higher
storeys, with a 4-window symmetrical pedimented facade, has 2
segmental-headed sashed windows at ground floor, with
geometrical glazing bars, moulded architraves and triple
keystones, flanked by round-headed doorways which have moulded
heads with keystones, pilastered architraves with plain
friezes and moulded cornices, and panelled doors with
fanlights; and round-headed windows at 1st floor with pilaster
jambs, moulded heads with keystones, and pedimented

architraves with enriched consoles. All these windows
(including the fanlights of the doors) have stained glass
margin panes. The pediment contains a wreath and banner with
raised lettering "GENERAL / BAPTIST / CHAPEL / ANNO DOMINI
MDCCCLX". The 5-window left side wall has square-headed
windows at ground floor and round-headed above, all sashed
with coloured margin panes; and the 3-window right-hand side
has similar windows. At the rear is an irregular 2-window
extension (for minister's vestry and organ chamber).
INTERIOR: church has horseshoe gallery on cast-iron columns
with composite caps, with original numbered box-pews upstairs;
and adapted original pendant gas-light fittings including
ventilated ceiling rose; former pulpit, organ loft with choir
stalls, and former box-pews at ground floor removed c1970.
Forms a group with Burnley Lane Baptist Church Hall to the
south (qv), to which it is now linked.