Railings Attached to Numbers 4 to 12 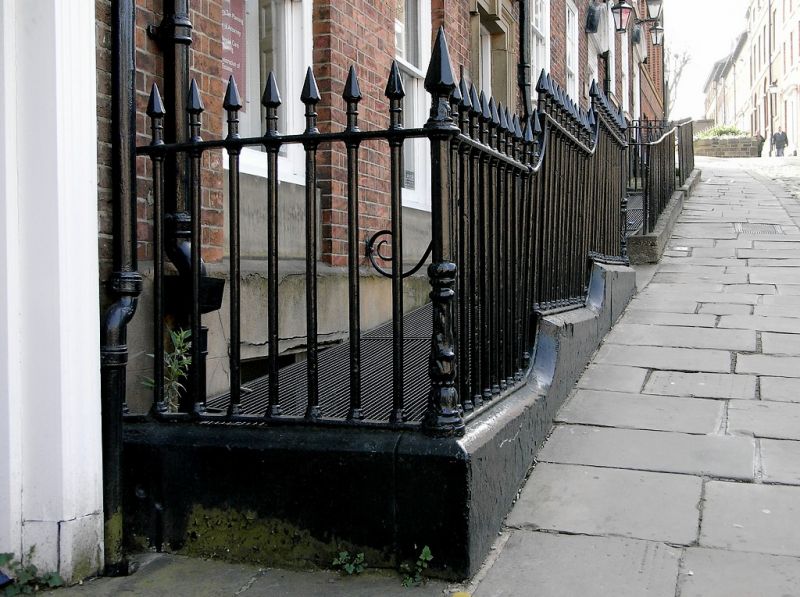 5 houses, now offices, and attached railings. c1771, with
early and mid C19 and early C20 alterations, restored late
C20. Built for Thomas Broadbent. Brick with ashlar dressings
and slate roofs with 6 gable stacks.
EXTERIOR: 3 storeys; 3 and 4 window ranges. Stepped row
following the slope of the site.
Nos 4 & 6, to right, have moulded cornices and brick parapets,
and windows with brick flat arches. Each has three 12 pane
sashes and above, 3 similar slightly smaller sashes. Below, to
right, simply moulded doorcases with segmental pediments and
6-panel doors, flanked to left by two 12 pane sashes.
No.8, to left, has early C20 front with sillbands, moulded
cornice and blocking course, and plain sashes with brick flat
arches and keystones. 3 windows on the upper floors, the
second floor windows smaller. To right, ashlar doorcase with
pulvinated frieze and semi-pediment, with moulded 6-panel
door. To its left, 2 plain sashes.
No.10, to left again, has C20 front, 4 windows, with moulded
cornice and ramped coped parapet. Windows have brick flat
arches. Four 12 pane sashes and above, four 9 pane sashes.
Pedimented wooden doorcase to right, with panelled door,
flanked to left by three 15 pane sashes.
No.12 has early C19 front with deep moulded cornice, and
parapet with 3 balustrade panels and shaped blocking. Windows
are plain sashes with brick flat arches, those to second floor
smaller. Doorcase to right with Doric pilasters and cornice
and 6-panel door with overlight, flanked to left by 2 sashes.
INTERIOR not inspected.
Plaque in memory of Dr DD Davies, 1778-1841. Outside, all
houses except No.10 have attached cast-iron spearhead railing,
early C19, that to No.12 raised on a deep ashlar base.
(The Buildings of England: Pevsner N: Yorkshire: The West
Riding: London: 1967-: 455).