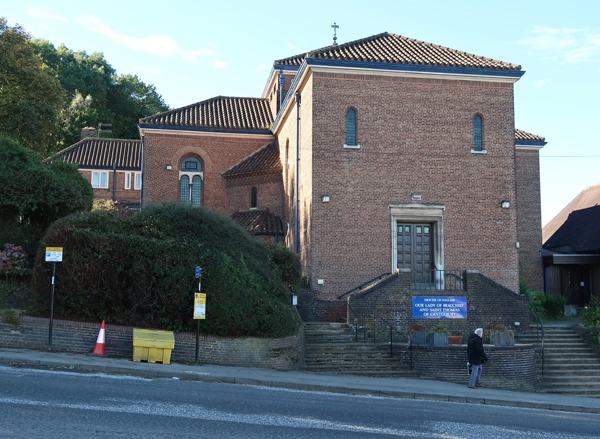 Entry Name: Church of Our Lady of Beauchief and St Thomas of Canterbury and Presbytery

Roman Catholic church and adjoining presbytery. 1931-32, by
Adrian Gilbert Scott. Built by MJ Gleeson, Ltd. Sacristies
1959. Internal alterations 1968. Brick with ashlar dressings
and hipped Roman tile roofs. Lombard Romanesque style.
PLAN: chancel with apse and vestry, crossing tower, nave,
transepts.
EXTERIOR: chamfered eaves. Windows have mainly round arches.
East end has hipped apse with 2 small windows. Below,
flat-roofed sacristy and vestry. Chancel has on either side a
round-arched 2-light window with ashlar shaft and transom,
under a fanlight.
Squat, square crossing tower has pyramidal roof with moulded
wooden eaves and cross finial. On each side, 4 rectangular
clerestory windows under the eaves.
Nave has on either side a round-arched 2-light window with
ashlar shaft and transom, under a fanlight. To west, on either
side, a small window set low down.
West end has 2 small windows set high, and central ashlar
doorcase with cornice and framed panelled double doors.
Outside, a landing with wrought-iron balustrade approached by
steps on each side with balustrade wall and slab coping.
Transepts have to east a hipped apse, and to west, a
round-arched 2-light window with ashlar shaft and transom,
under a fanlight. South transept has a door under the window.
North and south ends have a round-arched 3-light window in the
same style. In the return angles, to west, an angled extrusion
with a single small window. Below, a half-hipped canted
confessional with 2 small windows.
Presbytery, to south of sacristy, has hipped roof and 2 large
ridge stacks. Windows are mainly margin glazed steel framed
casements. 2 storeys; 5 window range. Symmetrical front with
late C20 addition to left. Rear has recessed centre flanked by
hipped wings.
INTERIOR: has plain round-arched barrel vaults throughout,
with mosaics, 1960-62, in each apse. Crossing has chamfered
re-entrant angles with round arches carried on a round piers
with Romanesque capitals. Panelled wooden ceiling with
coffered square wooden dome. North-east angle has doorway to
sacristy. South-east angle has foundation stone dated 1931,
and aumbry and piscina with shaped wooden surrounds like the
doors. Western angles have pairs of panelled doors, partly
glazed, to confessionals. All these doors have wooden
surrounds with shaped heads.
North transept has to east a pair of doors, also with shaped
heads. South transept has a door to west, under the window.
Transept niches have stone altars.
Nave has to west a panelled wooden gallery carried on a
bressumer with shaped wooden brackets. On the gallery, a
2-tower organ case. Under the gallery, a framed panelled
double door, partly glazed, with wooden surround and shaped
head. To left, a round-arched doorway to the gallery stair. To
right, a round-arched window to the former baptistry. Entrance
hall has a window at each end, and a stoup.
FITTINGS include plain octagonal font and late C20 altar and
lectern. Plain benches with open backs.
(The Lord's House (Catholic churches of the Diocese of
Hallam): Evinson D: 1991-: 110-111).