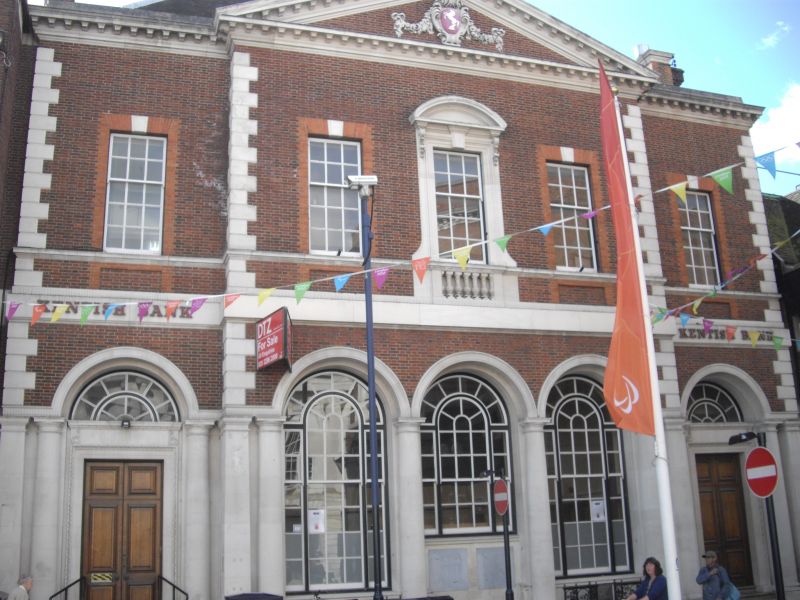 Bank. Built in 1927 for the National Provincial Bank to the designs of Frederick Charles Palmer (architect to the National Provincial Bank between 1920 and 19320, probably assisted by Walter Holden. Neo-Georgian style. Built of thin hand-made red bricks in Flemish bond with stone dressings and hipped tiled roof with end brick chimneystacks with moulded stone caps. Two storeys; five windows. Modillion cornice and end quoins. Central three windows project under a pediment with enriched shield bearing the county insignia, white horse rampant and the motto "INVICTA" and floral swags in high relief. First floor windows are 15-pane sashes with horns in paler red brick surrounds with central keystone but the central window has a stone architrave with curved pediment with brackets and stone balustrading below. Other windows have blank panelling below. Ground floor has under projecting centre three round-headed arches supported on engages Tuscan columns and two piers. The central window has been shortened to insert late C20 banking machinery. The others are full-height with cast iron scrollwork, the left side one with entwined initials (N P B). Ends have entrances with round-headed arches with fanlights, engaged Tuscan columns and end piers. Doorcases have moulded stone architraves with top tablet with consoles, six-panelled oak doors up stone steps and semi-circularfanlights.
INTERIOR: Shell niches to doorway and Banking Hall with wooden Composite columns, cornices with Vitruvian scroll and a large dome with decorative cast iron fishscale patterned glazing with opaque glass.
HISTORY: Palmer and Holden were responsible for some fine Inter-War banks for the National Provincial Bank.