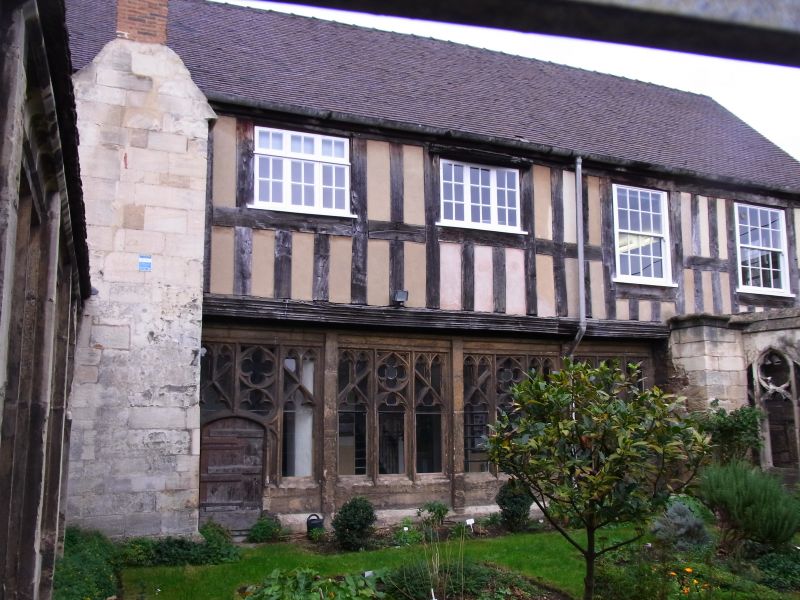 Part of the conventual buildings of the Benedictine Abbey of
St Peter, now public school house, part of the King's School
(qv). C13 with substantial C15 additions, C16 conversion to
house and later alterations. Ashlar, timber frame and brick,
tiled roof, brick stacks.
PLAN: three parallel ranges aligned north-south, the east
range built on top of the west alley of the Little Cloister
(qv), in the central range on the ground floor a large early
C13 vaulted chamber, formerly the undercroft below the
monastic Misericord or Chequer; the misericord refitted later
as a large chamber on the first floor; on the west side a C15
timber-framed range built above a recessed C13 entry to the
vaulted undercroft; the principal entry to the house is from
the west alley of the Little Cloister.
EXTERIOR: two storeys and attic; the north front with a gable
to each of the three ranges, and on the right the
timber-framed upper floors supported at ground level at the
north-west corner by a timber post with braces to the
first-floor bessumer; inset below the upper floors a C13
arched doorway framed by nook shafts with moulded bases and
capitals, and a moulded arch with hoodmould; the gable-end
wall to the central and east ranges of brick. The east side of
the east range is timber-framed with a first-floor jetty above
the garth wall of the Little Cloister (qv), and has a moulded
bressumer to the jetty and close studding with intermediate
rails; in the northern half of the wall two inserted C18
sashes with glazing bars (4x4 panes) and in the southern half
two three-light casements with glazing bars (2x3 panes in each
light). The south gabled end of the east range rendered on
timber framing.
INTERIOR: entrance hall in the centre of the east range with
early C18 dog-leg staircase with closed string and turned
balusters; in the first floor of the east range exposed
timber-framing. The early C13 undercroft on the ground floor
of the central range of three quadripartite vaulted bays with
transverse and diagonal ribs rising from short wall shafts
with moulded bases and carved foliage capitals; in the central
bay on the east side a large fireplace with a restored
segmental arched head.
On the first floor a chamber largely refitted in C19; in the

east wall an elaborate C19 timber chimney-piece to the large
fireplace incorporating earlier decorative features,
principally two heads in profile carved in relief, dated 1534,
each panel reset in a later frame at either end of the
chimney-piece, within the fireplace blind Gothic arcading to
the sides and back; across the front of the chimney-piece a
C19 frieze of panels carved with sunflowers. Early C18
panelling and below the inserted ceiling a frieze painted with
armorial shields.
In the roof space the early C13 roof with braced collars
altered in the C15 when the original tie beams cut out and a
form of crown post construction inserted; the remains of the
painting discovered during restoration work on the face of the
gable at the north end removed for display in the Parliament
Room in Church House (qv). Within the west range exposed
timber-framing.
(Welander D: The History, Art and Architecture of Gloucester
Cathedral: Stroud, Gloucestershire: 1991-; BOE: Verey D:
Gloucestershire: The Vale and the Forest of Dean: London:
1976-: 223).