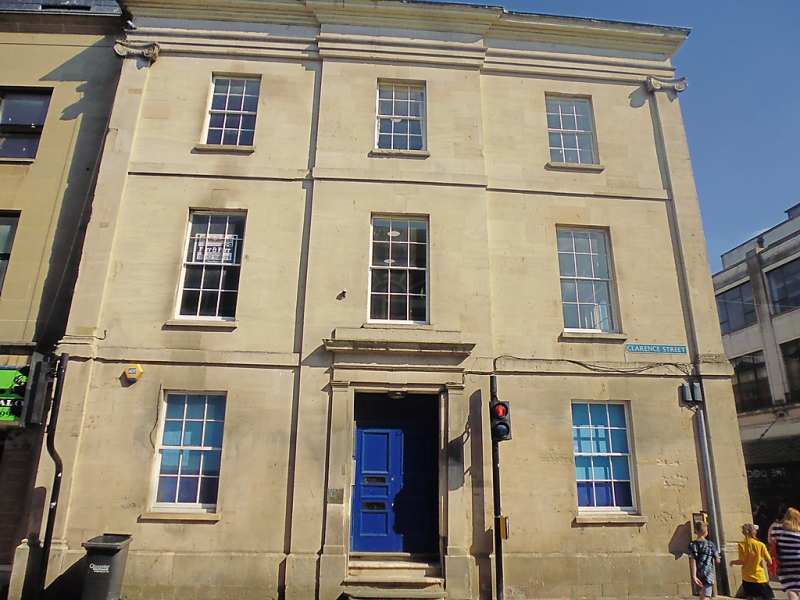 Includes: No.57 EASTGATE STREET.
No.57 Eastgate Street shown on OS map as No.1 Barton Street.
House facing Clarence Street and a smaller house attached at
rear facing Eastgate Street, both houses designed as a single
block, now linked as a single block of offices. 1832-3. Part
of the development of Clarence Street by William Rees,
builder. Late C20 alterations. Ashlar facing on brick, hipped
slate roofs, brick stacks. Double-depth block.
EXTERIOR: three storeys and basement, the former basement
areas now infilled. Symmetrical front to No.2 Clarence Street
of three bays with a slight projection to the central bay,
offset plinth, a raised band in the side bays at first-floor
level, a similar continuous band at second-floor level and a
deep crowning entablature; on the ground floor at the corners
clasping piers with moulded bases and, above the piers, giant
Ionic pilasters supporting the entablature. Central doorway
with stone steps to threshold and doorcase with pilasters and
entablature, panelled door; in bay to each side of doorway a
sash, and on the first and second floors three sashes, all
with glazing bars (3x4 panes) in plain openings with
projecting sills.
The front facing Eastgate Street has the return end to No.2
Clarence Street of two bays on left and front to No.57
Eastgate Street of two bays to right, both with raised bands,
crowning entablature and giant Ionic pilasters at the corners
similar to front to Clarence Street, and with a central
pilaster strip (former Ionic pilaster removed); on the ground
floor the wall faces between the corner piers and the central
pier are rusticated; the sills to the two ground-floor sashes
to left were lowered, and the ground floor of No.57 Eastgate
Street remodelled in late C20 with insertion of a central
doorway framed by pilasters and entablature and a sash to each
side; on the first floor two tall sashes to left and two tall
sashes to left, and on the second floor two sashes to left and
two sashes to right, all with glazing bars (3x4 panes).
INTERIOR: not inspected.