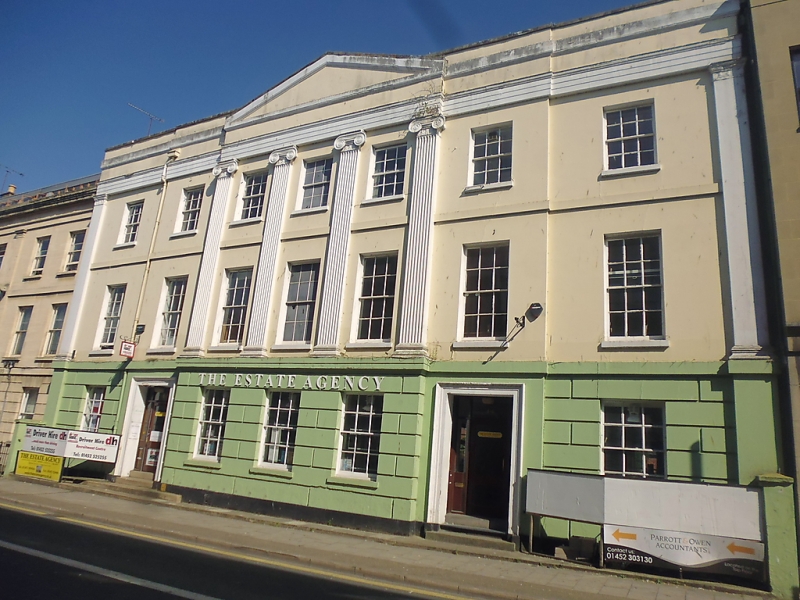 Pair of large town houses, now offices 1832-3. Part of the
development of Clarence Street by William Rees, builder. Late
C20 alterations. Stuccoed brick, slate roofs. Double-depth
block with short rear wings, originally a mirror image pair.
EXTERIOR: three storeys, basements and attics; to both houses
a single symmetrical front of seven bays with each end bay
slightly recessed and the three central bays slightly
projected (1+1+3+1+1); the former basement areas now infilled,
the ground floor rusticated with a strip pilaster at each end
and crowned by a raised band at first-floor level; on the
upper floors the three central bays defined by a giant order
of four Ionic pilasters and at each end a giant pilaster with
moulded impost at second-floor level between the pilasters; a
raised band and a crowning entablature with a mutilated
cornice; on the entablature over the three central bays a
pediment with mutilated eaves and with coped parapets to
either side.
On the ground floor the entrance doorway to each of the former
houses in the second and sixth bays with three stone steps to
thresholds, both door frames recessed in openings with moulded
architrave surrounds, with side and transom lights; in the
three central bays between the doorways and in the end bays
sashes with glazing bars (3X4 panes); on the first floor five
tall sashes and on the second floor five shorter sashes, all
with glazing bars (3x4 panes), all in openings with projecting
stone sills. The former iron railings to the front areas have
been removed.
INTERIOR: not inspected.