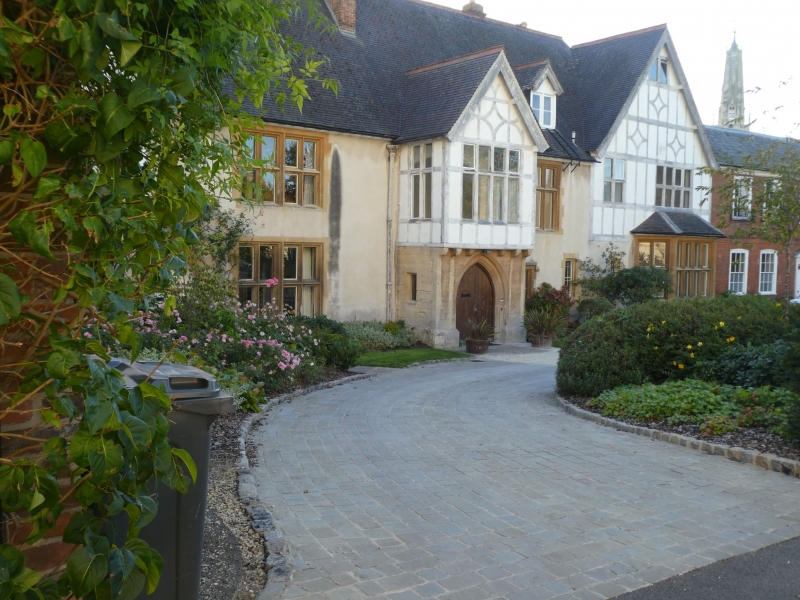 House assigned to the Prebendary of the Fourth Stall of
Gloucester Cathedral, now apartments (Nos 7, 7A and 7B) and
accommodation for School for the Ministry (No.7C). C16 and C17
house, believed to incorporate late medieval monastic
building, possibly the Granary, altered in C18, and
extensively remodelled in late C19; converted to apartments
mid C20. Roughcast on rubble with ashlar features and details,
some timber-framed features, gabled slate roofs with timber
barge boards, two gabled dormers, brick stacks.
PLAN: a long range of stone facing College Green; on the
front, approximately in the centre, a projecting, cross-gabled
porch wing; towards the left-hand end a slightly projecting
cross-gabled wing, with the end bay of range to left
incorporating passage through to garden and to long rear wing,
now No.7C; at the right-hand end a larger, slightly
projecting, cross-gabled wing.
EXTERIOR: two storeys, attic and cellars; the front generally
remodelled in late C19 in Domestic Revival style for enhanced
picturesque effect; rubble walls with ashlar details except
for timber framing to first floors and gables of the three
cross-wings; on the ground floor the enclosed porch of ashlar
with offset plinth and in front wall an archway with moulded
jambs and pointed arch; above the porch the timber-framed
cross-wing with front jetty and close studding, six panels
wide to front and four panels to each side with intermediate
lower and upper rails, the four central and upper panels on
the front, and the two central and upper panels on each side
fitted with plain casements; in the gable a pattern of studs
and quadrant braces; in range to left of porch on the ground
floor a four-light, stone-mullioned casement window, and on
the first floor a window with similar details with upper
transom.
In the front of the cross-gabled wall to left on the ground
floor a stone-mullioned casement window; the first floor and
gable timber-framed with close-studded panels with upper
intermediate rail, the four central and upper panels panels
fitted with casements; in the timber-framed gable a two-light

casement and in central panels below and above quadrant
braces.
In range to left a doorway with pointed arch to passage and a
stone-framed, single-light casement; above on first floor a
similar two-light casement In range to right of porch on the
ground floor a stone-mullioned window, and on first floor
further right a similar three-light window with upper transom.
On the cross-gabled wall to right on the ground floor a
stone-framed, canted bay window with mullions and central
transom has four-lights to front and two lights to sides, all
fitted with casements, the first floor and the gable
timber-framed with close-studded panels; on the first floor,
above an intermediate rail, a two-light casement to left and a
four-light casement to right, in the gable two of the lower
panels and one of the upper panels have quadrant braces, and
in the apex a two-light casement.
INTERIOR: in No.7A the principal room on ground floor has late
C16 panelling of small, framed panels, reputedly brought in
and re-arranged in late C19, fireplace with C18 bolection
mould surround; room above has a late C16 timber chimney-piece
on carved brackets comprising three square panels above three
carved frieze panels, all framed by caryatids supporting a
carved frieze, in the central panel a carved shield, and in
each side panel a lion's head all within strapwork cartouches.
C18 door architraves.
Rear wing largely refitted in late C20, contains some C18
panelling and chimney-piece painted white. Other interiors not
inspected.
(Eward S: No Fine but a Glass of Wine, Cathedral Life at
Gloucester: Salisbury: 1985-: 316; BOE: Verey D:
Gloucestershire: The Vale and the Forest of Dean: London:
1976-: 243).