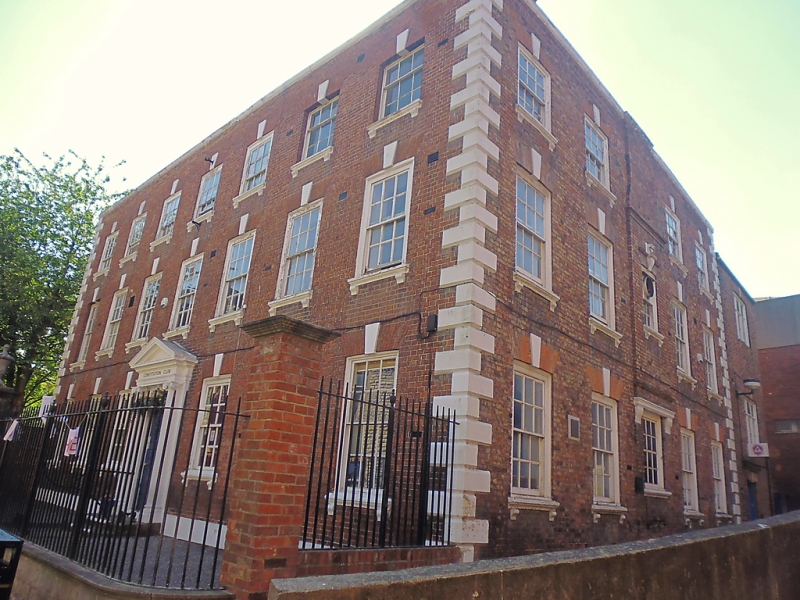 Formerly known as: Conservative Club QUEEN STREET.
Town house, now a club. Dated 1750 on rainwater head. Built
for Richard Chandler, woolstapler; purchased by the Gloucester
Branch of the Conservative Party 1883 and opened as
Conservative Club; late C19 and minor C20 alterations for the
club. Red brick, stone details painted white, hipped slate
roof behind parapets, brick stacks. Double-pile block with
wings at rear on each side of a small, infilled, court.
EXTERIOR: main block three storeys and cellar, rear wings two
storeys; all with offset plinths and raised and chamfered
quoins at outer corners of the main block, parapets with
moulded stone coping. Symmetrical front of seven bays, on the
ground floor in the central bay the entrance doorway, two
stone steps to threshold with cast-iron footscraper to right,
stone doorcase with fluted Ionic three-quarter columns,
entablature and pediment. To each side of doorway three
sashes; on first floor seven sashes, and on second floor seven
shorter sashes, all with glazing bars (3x4 panes on ground and
first floor, 3x3 panes on second floor), and all in openings
with rubbed brick flat arches set with raised key stones and
moulded stone sills on moulded end-brackets.
The north and south sides of the main block each of five bays,
on the north side in the central bay a slight projection for a
chimney-stack built off a moulded stone base-slab on moulded
stone brackets, on the ground floor below the projection a
sash and on the first floor in the face of the projection a
small sash, in other bays sashes similar to front all with
glazing bars; on the south side on the ground floor in the
second bay to right an early C19 decorative cast-iron porch,
on the first floor in the central bay a Venetian window
inserted in the lower part of an opening for an earlier,
larger window indicated by an infilled semicircular, rubbed
brick arch set with a raised key stone, and the original
moulded stone sill; on the ground and first floors in other
bays original or replaced sashes with glazing bars; on the
second floor to each side two casements with glazing bars (4x4
panes), and in the central bay a short sash (3x2 panes), all

in openings with details similar to the front; the north and
south sides of the added rear wings also with similar
fenestration.
INTERIOR: central entrance hall; mid C18 open well staircase
at rear to right with open string, column-on-vase balusters,
ramped handrail, carved acanthus tread-end brackets and
curtail step with column newel set within balusters, stair
dado with fielded panels, skylight above stairwell; in room to
left of hall a C18 fireplace with eared architrave surround
and fielded panelling, other C18 joinery and dentil ceiling
cornices in several other rooms on ground and first floors; on
second floor on the north side a long room has late C19 open
timber roof of six bays with arch-braced collar trusses
supported on corbels.
The forecourt walls and piers (not included) rebuilt in
matching style in 1980's.
(BOE: Verey D: Gloucestershire: The Vale and the Forest of
Dean: London: 1976-: 250).