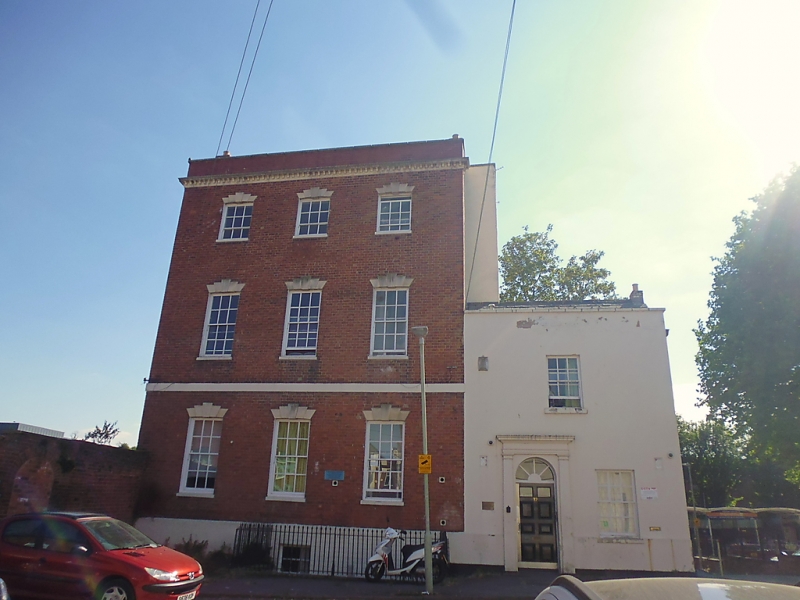 House. c1800, later minor alterations. Brick partly stuccoed,
stone details, slate roofs, brick stacks. Facing Eastgate
Street at the south end of a cul-de-sac, a double-depth block
with a full height bow projection at rear and a small entrance
wing attached on the right hand side.
EXTERIOR: main block of three storeys and basement, two storey
entrance wing. Front of the main block of three bays with the
basement storey set within a partly railed area and painted
white; stone band at first-floor level, stone crowning cornice
with close set modillions, brick parapet; the basement has a
single sash with glazing bars; on both the ground and first
floors three sashes with glazing bars (3x4 panes); on the
second floor three shorter sashes with glazing bars (3x3
panes), all in openings with flat-arched heads of five raised
and stepped stone voussoirs and projecting stone sills. The
stuccoed front of the entrance wing has arched doorway to left
with fanlight crudely renewed in C20 and framed by stone
doorcase of Tuscan pilasters and entablature; an eight panel
door of raised and fielded panels; a sash window to right and
a central sash on the first floor, both with glazing bars (3x4
panes). The garden front at rear has details similar to the
entrance front except for fully exposed basement storey; on
each floor the bow to right has three sashes and to the left
of bow on each floor a single sash, all with glazing bars.
INTERIOR: not inspected.
HISTORY: a panel fixed to the front is inscribed: "This
building previously named "Richleigh" and later known as
School House formed part of Sir Thomas Rich's School sited
here 1889-1964."