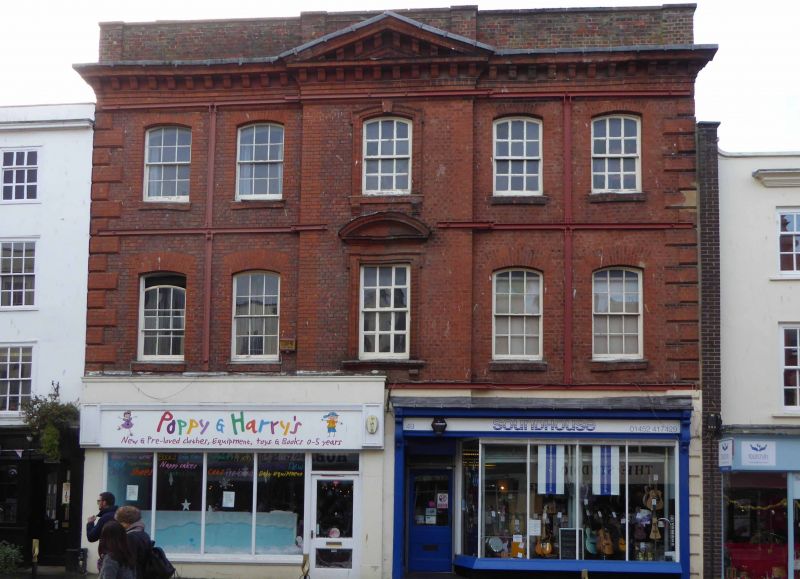 Two shops and former dwellings, possibly an early conversion
of a large town house. Early C18, built above the surviving
C13 undercroft of a former medieval merchant's house; later
C18, C19, and C20 alterations and additions at rear. Brick
with rubbed brick details, slate roof partly replaced by C20
bituminous flat roof, undercroft of stone rubble with dressed
stone details.
PLAN: vaulted undercroft is all that survives from medieval
house; the C18 building divided into two units of equal size
by a central party wall which blocks the window openings in
the central bay of the upper floors of the street facade;
therefore presumed to be a mid C18 alteration contemporary
with the provision of staircase of similar design in each
unit; both units originally double-depth block with central
stairwells; C19 rear wings and linked outhouse at rear of
No.47.
EXTERIOR: three storeys and surviving parts of attics, cellar
and vaulted undercroft; the front with an early C20 shop-front
to No.47, and a mid to late C19 shop-front to No.49 with
recessed entry to doorway on left and fascia with moulded
cornice and console end brackets; upper floors above shops of
five bays in dark red brick headers with details in brighter
red and rubbed brick, a slight projection to the central bay,
and crowning modillion cornice breaking forward with a
pediment above the central bay against the parapet, slightly
projecting piers at the angles of the parapet over the central
bay and at the outer angles of the front, raised and chamfered
quoins in brickwork at the outer corners, the quoins to the
right-hand angle preserved to ground level, and plain bright
red brick quoins to the corners of the projecting central bay;
in the central bay on the first floor a sash with thick
glazing bars (3x4 panes) in opening with moulded and eared
architrave, moulded sill, and a floating, segmental pediment
above; on the second floor an early sash with thick glazing
bars (3x4 panes) in opening with segmental arched head,
moulded and eared architrave with a raised keystone in the
arch and a projecting sill, the ends of both sills supported
on consoles; in bays to either side of the central bay on each
upper-floor sashes with glazing bars (3x4 panes) in openings
with segmental, rubbed brick arched heads, brighter red brick

jambs and projecting sills. A restraining steel frame applied
to the front in mid C20 to prevent movement.
INTERIOR OF No.47: shop refitted in C20; C20 stair to first
floor, mid C18 open well stair from first to attic floor with
closed moulded strings, column newels, column-on-vase
balusters and toad-back handrail; several doorways on upper
floors retain C18 moulded architraves; some C18 fielded panel
doors have been removed and stored in the building.
INTERIOR OF No.49: shop refitted in C20; mid C18 open well
stair from ground floor to attic with details similar to stair
in No.47; front room on first floor retains C18 moulded
cornice, door and window joinery, C18 door to room on second
floor.
CELLAR AND UNDERCROFT: a large medieval cellar below both
shops, with stone rubble walls, subdivided in early C18 into
smaller units with brick walls and barrel vaults; in the
rubble wall below the street front is evidence of a medieval
doorway to Westgate Street at either end, each doorway flanked
by a recess; extending from the cellar to the rear, and mostly
below No.47, a large C13 undercroft, its barrel vault
strengthened by transverse, chamfered ribs in eight bays, the
bays at the further (southern) end partially blocked by
inserted C18 walls; in the west wall an original doorway with
stone jambs and later blocking in rubble; remains of original
plaster in the bays of the barrel vault.
HISTORY: an interesting early C18 semi-detached plan, with
fine details including gauged brickwork, and notable for the
survival of a C13 vaulted undercroft.