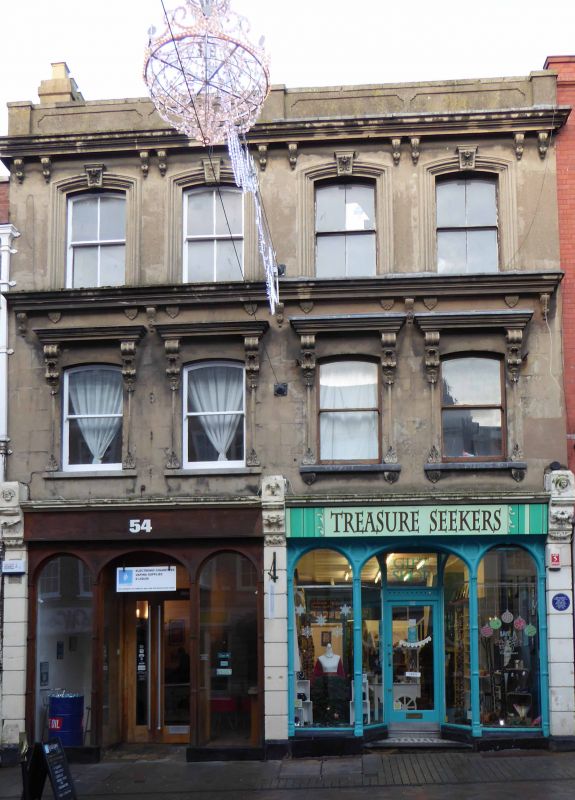 Includes: Gloucester Services Club COLLEGE STREET.
Block of two shops and former dwellings. c1870, C20
alterations. Rear part of No.52 now a club; upper floors of
No.54 part of Lamprey Hotel No.56 Westgate Street (qv). Ashlar
facing on brick, cast-iron shop-front, slate roof.
Double-depth block.
EXTERIOR: three storeys and cellars; the front a unified
facade in an Italianate style; on the ground floor two
shop-fronts framed by rusticated strip pilasters capped by
carved brackets supporting blocks at the ends of fascias above
the shop-fronts, on the face of each block a finely sculpted
head in relief within a roundel, the fascias capped by string
courses between the blocks; No.52 to right has original, cast-
iron, arcaded shop window with a central recessed entry to the
doorway, moulded shafts with moulded capitals and bases
attached to the slender piers, and arches with roundels in the
spandrels; No.54 to left has mid C20 shop window; at
first-floor level a moulded cornice on consoles, and similar
crowning cornice on pairs of brackets with panelled parapet
above; on the first floor two plain, horned sashes to each
unit in openings framed with moulded architraves on each side
and a plain segmental-arched head, with floating cornice
supported on heavy console end-brackets and projecting sill on
small end-brackets; on the second floor to each unit two
similar sashes each in an opening with a segmental arched
head, and moulded architrave with a carved key stone in the
arch.
INTERIOR: not inspected.
Of principal interest for the prominent facade in a Italianate
style, characteristic of mid C19 commercial architecture and
also distinguished by a good surviving shop-front to No.52.