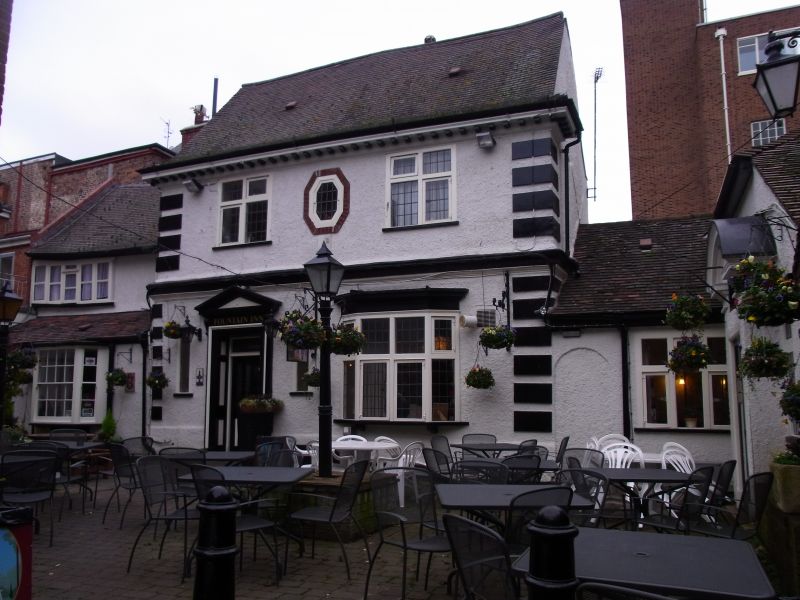 Public house. Mostly rebuilt as coffee house in late C17 but
retaining part of late C16 range, C18 alterations, remodelled
c1900. Brick and timber frame under roughcast render, stone
details, plain tile roof, brick stack.
PLAN: the main range is set back on the east side of a
courtyard behind Nos 51 & 55 Westgate Street (qv) with the
entry to the yard through a passage below the west end of
No.51 Westgate Street (not included) and through a gateway on
the east side of Berkeley Street; a secondary range on the
south side of the yard is linked to the main range by a short
C20 infill block. The major portion of the main block is a mid
to late C17 gable-end parallel-range block with the remains of
the late C16 timber-framed range extending from the northern
gable-end wall.
EXTERIOR OF THE MAIN RANGE: two storeys, attic and cellar; on
the front offset plinth, a moulded band at first-floor level,
a modillion eaves cornice, and large, widely spaced strip
quoins at the outer angles; principal doorway to left with
moulded architrave and entablature with pediment above, four
panel door and fanlight, the upper panels of the door and the
fanlight with rectangular leadlight glazing, the doorway
flanked by narrow single light windows. Oriel window to ground
floor to right, with timber mullions and upper transom, of two
lights to front and canted sidelights with casements; on the
first floor symmetrical fenestration: two timber-framed
casements each with a central mullion and an upper transom,
and in the centre an elongated vertical octagonal window in a
heavy timber frame with projecting brick surround.
A single storey, lean-to extension of c1900 added against the
late C16 wing at the north end of the main block. All the
casement windows in the range have rectangular leadlight
glazing of c1900.
INTERIOR OF MAIN RANGE: on the ground floor the partitions
mostly removed to form a large bar room with staircase and
service rooms at rear. Early to mid C17 dog-leg staircase with
closed strings, square newels, turned balusters and finger
grip handrail; at the southern end of the bar room on the
inner lateral wall a large fireplace with a mid to late C17
carved and moulded stone chimney-piece of exceptional quality

with a heavy bolection mould architrave surround surmounted by
a deep pulvinated frieze carved with scrolled acanthus and a
moulded cornice, breaking the frieze and architrave a large
projecting and extended keyblock carved with foliage. Brick
walled and vaulted cellar.
THE SOUTH RANGE: a large reception or assembly room on the
first floor is approached by a stair and entrance lobby within
an extension with a cat-slide roof on the north side; the
entrance doorway from the yard is set in a slight projection
surmounted by an open segmental pediment framing a block
carved in bas-relief showing King William III mounted on a
horse and inscribed below "GUILIAMUS III" and above"Dieu
defend le droit"; on the first floor to right of the entrance
extension a large C18 sash with glazing bars (4x3 panes).
Interior refitted in C20.
HISTORY: the inn is recorded as a hostelry in the Abbey Rental
of 1455 and converted as a coffee house and tavern in 1672,
the probable date of the rebuilding of the main block. The
full extent of the alterations of c1900 cannot be determined
without further investigation. Traditionally, the inn is
associated with a visit to Gloucester by King William III. To
show his contempt for a Jacobite club which met in the upper
room of the south range, the king is reputed to have ridden
his horse up the stair leading to the room from the courtyard.