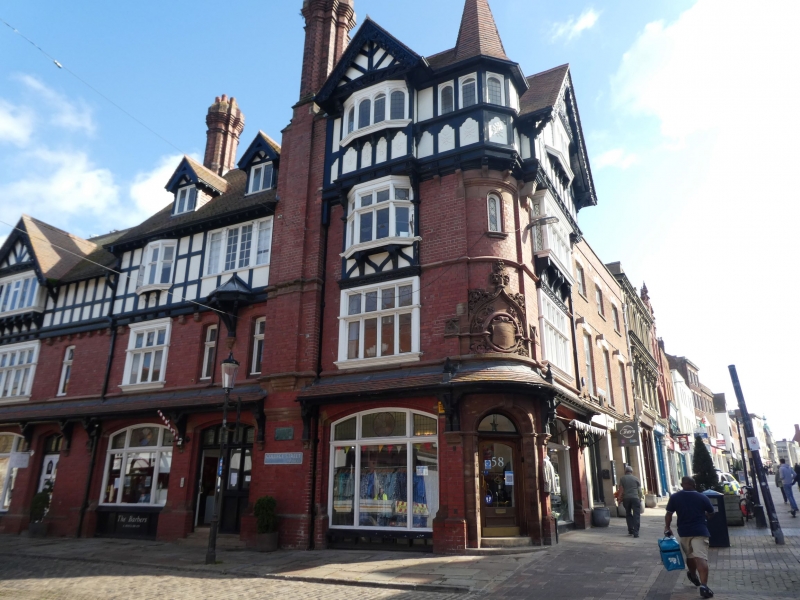 Includes: Nos.2-8 COLLEGE STREET.
Terrace of five shops and offices. 1890. By FW Waller
Red brick in English bond with red terracotta and stone
details, timber-framing; tiled roofs, gables and gabled
dormers with scalloped and pierced timber barge boards, tall
brick stacks. Domestic Revival Style.
PLAN: long, single depth range in which No.58 Westgate Street,
at the south end of the terrace, is designed to accentuate the
importance of the approach to the cathedral via College
Street; shops on the ground floor and offices above; at the
north end of the range a carriage way provides access to rear
of shops.
EXTERIOR: No.58 Westgate Street of three brick storeys and a
jettied, timber-framed attic story with a gable on each outer
face and, above the quadrant corner, a polygonal fleche with
decorative wrought-iron finial; to left of a projecting
chimney-stack the front of No.2 College Street is of two brick
storeys with a jettied, timber-framed third storey, and attic
with two gabled dormers; Nos 4, 6 & 8 have identical fronts of
two brick storeys and jettied timber-framed attic storey, the
jetties supported on corbels. No.58 Westgate Street on the
ground floor in the canted angle at the street corner has shop
doorway with semicircular arched fanlight, and, on each side
of the corner, a shop window with a three-light and upper
transom timber frame containing leaded glazing in the upper
lights; Nos 2-8 College Street on the ground floor each have a
doorway with segmental arched fanlight, and to left of each
doorway a shop window similar to No.58 Westgate Street; over
the shops a continuous, tiled hood supported on timber
brackets, and at first-floor level a stone string course;
No.58 Westgate Street at first floor-level has a quadrant
corner embellished with a cartouche in an elaborately moulded
panel contained within an ogee-arched frame, all in moulded
terracotta; on the first floor of No.58 Westgate Street on the
south front a projecting, stone-framed five-light mullion and
upper transom casement window, on the west side a similar
four-light window, and on the first floor of 2 to 8 College
Street above each shop window a similar three-light window to
No.2 and a five-light window to each of the other units; above
the doorway to No.2 a polygonal timber base for a proposed

projecting balcony on the second floor is supported by
brackets from a moulded corbel, on each side of the base a
recessed single light casement with upper transoms, above each
doorway in each of the other shops a similar window; on the
second floor of No.58 Westgate Street in the lower zone
timber-framing with arched panels infilled with plaster
decorated with roses or fleur-de-lys in relief, in the south
gable a canted oriel window of five arched lights and under
the west gable a similar four-light window; on the second
floor of Nos 2 to 8 College Street a three-light canted oriel
to No.2, and a rectangular five-light oriel with dormer gable
above each of the other units, all the oriels supported on
timber brackets. At the south end the two storey entrance to
yard at rear of range with carriageway and gabled first floor
with timber-framed front.
On a metal commemorative plaque attached to the west front on
the right hand side of the doorway to No.2 College Street the
inscription: "In 1890 the street was widened from 10' 9", the
buildings on the eastern side were afterwards erected by the
Gloucester Cathedral Approaches Co Ltd involving a sacrifice
of 10,000. FW Waller Archt".
INTERIOR: not inspected.
A competent design in the Domestic Revival Manner, which makes
a significant contribution to the streetscape in this area.
Waller exhibited a perspective drawing of these buildings in
the 1894 Royal Academy Exhibition.
(BOE: Verey D: Gloucestershire: The Vale and the Forest of
Dean: London: 1976-: 246).