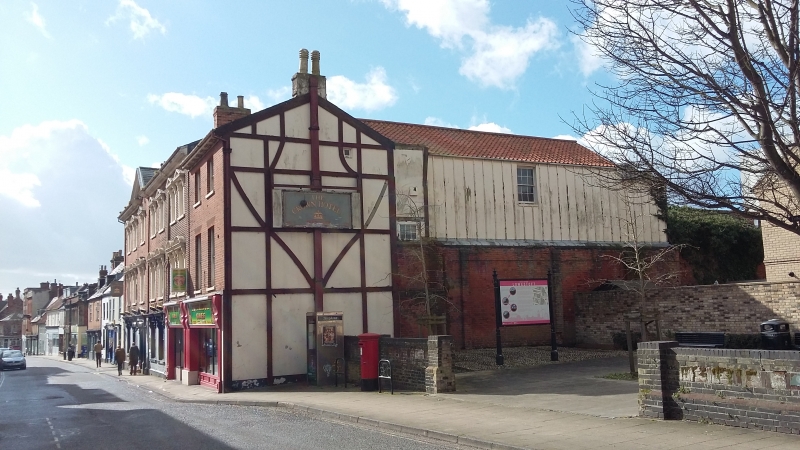 A hotel dating originally to the C17, remodelled in the mid-C19 with interior alterations and an extension to the rear dating to the mid-C20.

A hotel dating originally to the C17, remodelled in the mid-C19 with interior alterations and an extension to the rear dating to the late C20.

MATERIALS: the building is constructed of brick with a slate roof. The later C20 addition to the rear is also of brick with an asphalt roof covering.

PLAN: the original part of the building had a rectangular footprint, with a C19 cross wing to the south. A later C20 addition is circular on plan and extends to the west of the main building. A further wing projects westward to the north-west of the site.

DESCRIPTION: the building is of three storeys and of seven bays to the High Street. The hotel premises comprise the five bays to the left, the two bays to the right with shop units to the ground floor, above which are the upper floors of the hotel, extending by a further two bays into the upper floors beyond, which are in a plainer style. The advanced entrance is located centrally in the five-bay frontage, with a classical door case and a pediment supported by fluted ionic columns on square bases. The brickwork of the ground floor is painted with a painted base course and a moulded string course, above which, flanking the doorway pediment, are two signs, both reading CROWN HOTEL. Each side of the doorway are two window openings with bracketed consoles at the same level as the string course. The window openings have horned two-over-two pane sash frames. The first-floor openings have segmental pediments aligned to the string course, supported by decorated consoles, whilst those to the second floor have pediments with plain consoles. This pattern of window openings extends over all seven bays. The central bay is topped by a further open pediment set on a moulded eaves cornice, incorporating a roundel with a painted crown in low relief set within it. There are plain pilasters at the left-hand corner and beyond the fifth bay. The Crown Street elevation has a series of late C20 windows to the ground and first floors, and brick columns at the corners. The rear elevation is irregular with later additions, the gable of the axial wing located to the right. The north elevation has faux timber framing to the left-hand section of the elevation. To the right, the brick ground floor sits below a timber-sheeted first floor. To the rear of the hotel is a brick-built two-storey C19 outhouse with a pantile roof covering, extending axially to the west. The elevation includes a centrally-located clock to the first floor, the clock itself a later replacement of the original. Much of the ground-floor brickwork has been renewed and window openings on the first floor have been blocked up, as well as other openings being introduced to the ground floor.

There is a later C20 addition to the rear of the hotel with a circular footprint which is not of special interest and is excluded from the listing.

INTERIOR: the interior of the building retains original features, but has been incrementally altered, including changes to the main public spaces and the renewal of bar fittings. The ground floor contains the principal bar areas in the original part of the building, and retains two large fireplaces, one with fitted side cupboards. On the first floor are two further functions spaces, formerly two separate rooms, now remodelled, together with a bar and a large kitchen. The larger function area has been formed by removing the wall between two smaller rooms. Neither areas retain fireplaces although the chimney breasts survive. A further function room located on the first floor of the axial wing has a partially-exposed roof structure. The second floor contains a manager's flat and other rooms which were formerly used for guest accommodation. Within the remodelled interiors are a number of fireplaces, plain plaster cornices, C19 doors and associated joinery.

The name Lowestoft is Scandinavian in origin and may be translated as Hloover’s toft – the homestead of Hloover. The town relocated to the cliff-top from an earlier site, about a mile to the south-west, during the period 1300-1350, partly because of increasing maritime activity (especially herring-fishing) and the need it created to be closer to the sea, and partly because of the difficulty of accommodating an expanding population in-situ without building houses on valuable agricultural land. The area chosen for the new site was low-grade coastal heath, used mainly for the rough-grazing of livestock which became a more useful asset to the manorial lord as building-land. The main street is of sinuous alignment, following the natural curves of the cliff. The better-off members of the community lived along the High Street whilst the less affluent largely resided in a gridiron side-street area to the west. Lowestoft was thus a planned late medieval town.

The High Street was lined with burgage plots containing prosperous merchants’ houses for much of the medieval and early modern period, and the cliff-face was made usable by terracing. The cliff-top itself provided an area behind the houses for the storage of household goods and materials; and the first step down was multi-purpose, sometimes planted with fruit trees and used as an amenity area, but also functioning as a place for putting all kinds of household waste. The second and third stages down were mainly taken up with the buildings that serviced fishing and other maritime enterprise: curing-houses, net-stores, stables and the like. Access from the cliff-top to the sea was provided by footways known as scores (three of them widened for use by carts) – a word deriving from the Old Norse ‘skora’, meaning ‘to cut’ or ‘to incise’. These had originally started life as surface-water gullies down the soft face of the cliff – a natural process that lent itself to use as tracks.

The chief trade of Lowestoft and the source of its prosperity remained herring fishing until the C19. Then in 1827 the harbour was created, and in 1832 the navigation continued through to Oulton Broad, giving access to the River Waveney and Norwich. Samuel Morton Peto was brought in to construct the outer harbour, and he ensured the arrival of the railway in 1847 as well as developing the land south of the harbour as a seaside resort. The town was bombarded by the Germans in 1916 and suffered considerable damage from 178 enemy raids in the Second World War. Post-war reconstruction involved new roads being cut through the northern part of the town. In the later years of the C20 the fishing industry has almost completely declined.
The Crown Hotel stands in the midst of the historic northern settlement. It dates originally to the C17 although it was extended and altered in the C19. Its location on the corner of the High Street and Crown Street, historically the principal east-west street leading into the town from the west to the High Street, meant that it stands in one of the oldest parts of the settlement. In the later C19 the Hotel was owned by the Gage family who were a well-known hotelier family in Suffolk (for example the family purchased another Crown Hotel in Southwold). The hotel appears and is named on the 1st Edition Ordnance Survey (Suffolk, 1886). As well as C19 alterations and additions the building was altered in the late C20 with the construction of a function space to the rear of the building which replaced earlier structures shown on the OS map. Other changes in the C20 include to the interior of the cross wing which faces Crown Street. There is also a range of outhouses to the rear of the hotel, which appear to have been stables. Local information indicates they were latterly used as a brewery in the late 1980s and 1990s. They are now also in poor condition. The hotel has been closed since 2009. The Crown Hotel was first listed at Grade II in October 1977.

The Crown Hotel in Lowestoft dating originally to the C17 and remodelled in the C19 is listed for the following principal reasons:

* as a multi-phase hotel development located in the historic centre of Lowestoft, which clearly demonstrates the evolved phasing of a significant historic building type;
* as an architecturally-distinguished example of C19 hotel architecture, its well-proportioned principal elevation enriched with carefully-wrought detailing.

* for its presence in the historic core of Lowestoft, and its representation of, and association with, the later development of Lowestoft as a seaside resort in the C19.