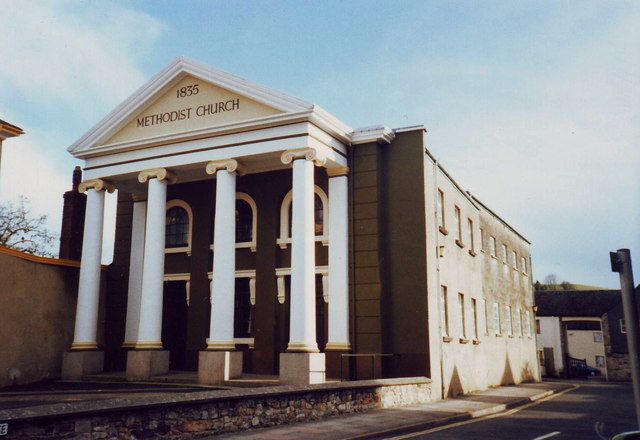 Formerly known as: Methodist Chapel WEST STREET.
Wesleyan chapel, now church. Dated 1835, but section
immediately behind the facade appears to be mid or late C19.
Front rendered; right side and rear solid roughcast; left side
stone rubble, with red-brick window surrounds to mid/late C19
section. Hipped slated roofs. Portico at front, with side
doors opening on to passages which in turn lead to chapel at
rear. Between the passages a schoolroom, and above them both a
meeting room. Chapel galleried on N, E, and W sides; rostrum
on S with organ behind it in a small rectangular projection. 3
bay Ionic portico with triangular pediment. Behind it 2 doors
and a window with cornices on consoles. Window has 6-paned
sashes. Doorways have 4-panelled double doors and patterned
fanlights. Upper storey has 3 round-arched windows with
bracketed sills and moulded architraves; small-paned glazing.
Side walls of mid/late C19 section have small-paned wood
casements. Side and rear walls of chapel have 8-paned sashes
in recessed box-frames, except that the lower sashes of the
gallery windows have only 4 panes; rear gallery windows
round-arched with fixed small-paned sashes. Interior:
galleries have enriched iron columns and panelled fronts; rear
gallery curved to make a 'U'-shape. Wooden rostrum with ornate
iron balusters to stairs. At rear of chapel 2 open-well wood
stairs to gallery; thin, square balusters, handrail ramped up
over column-newels. Ceiling has moulded cornice and 2 round
ventilators; these have Gothic-patterned iron grilles and
key-pattern plaster surrounds. Meeting room has 2 C19
chimneypieces with bracketed mantelshelves. At S end 2
round-arched doorways with moulded architraves.