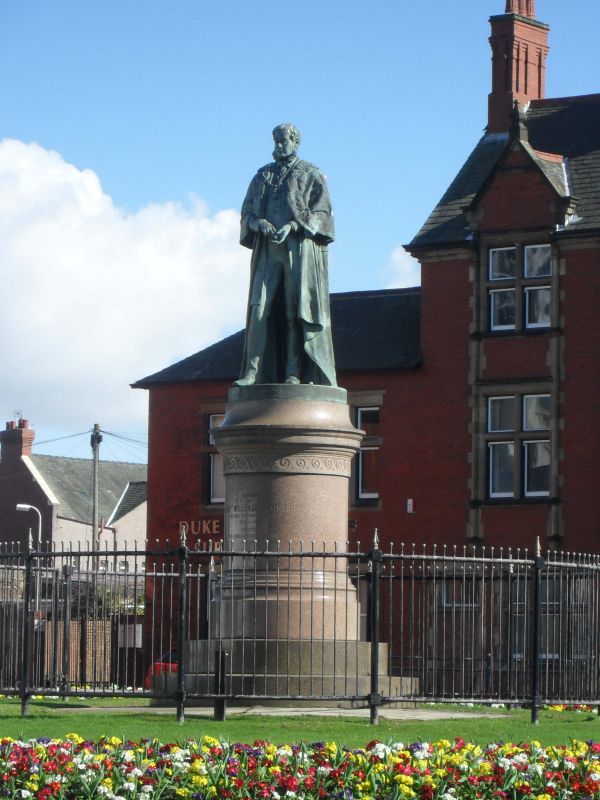 Statue. 1891. Sculptor: Percy Wood. Bronze on granite
pedestal. 2-step stylobate to cylindrical pedestal inscribed:
'IN HONOR/ OF HENRY WILLIAM SCHNEIDER/ MAYOR OF THIS BOROUGH/
1875 TO 1878/ ERECTED/ BY PUBLIC SUBSCRIPTION/ 1891';
Vitruvian scroll beneath cornice. Robed figure of Schneider
faced up Duke Street. Schneider, Hannay and Co built the first
blast furnaces in Barrow between 1857-59 then amalgamated with
James Ramsden's company to form the Barrow Haematite Iron and
Steel Company in 1866. Using the Bessemer process this became
by 1876, the biggest iron and steel plant in the world. His
life is chronicled elsewhere. Centrepiece of Schneider Square.
(Barnes F: Barrow and District: Barrow in Furness: 1967-: 96;
Banks A G: H W Schneider of Barrow and Bowness: Kendal:
1984-).