A Grade I Listed Building in Sudbury, Suffolk 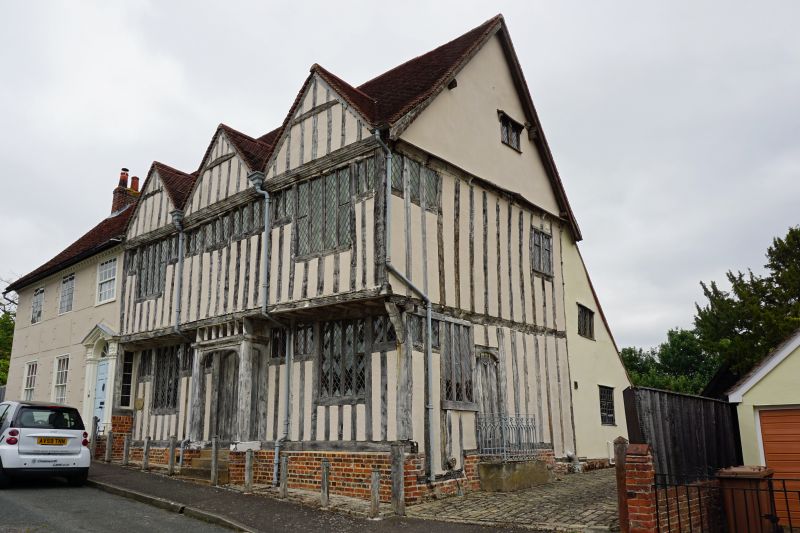 LAVENHAM SHILLING STREET
1.
5377
(east side)
Shilling Old Grange
and No 16
TL 9149 50/653 23.1.58
GV
2.
A large C15 and later timber-framed and plastered building with a tiled
roof. The whole building was refronted in the late C17 but the south
part was heavily restored in the 1920s when the timber-framing was exposed
and the front returned to its original half timbered style. At the rear
there is a courtyard with jettied gables and arched doorways. It was
this house which Isaac Taylor the engraver and father of Jane and Ann
Taylor ("Twinkle, Twinkle Little Star") rented for £6 per annum in 1736.
The family moved to No 17 (Arundel House) in 1793. Two storeys and attics.
N 16 has a good C18 plastered front with pebbledash rusticated panels
and a wood modillion eaves cornice. Three window range the upper storey
has 2 two-light leaded casements and one double-hung sash window with
glazing bars, and the ground storey has double-hung sashes with glazing
bars. A 6-panel door with a semi-circular fanlight with fan glazing
has a fine wood doorcase with fluted pilasters and an open dentilled
pediment. The north side has a blocked 4-centred arch with carved spandrels.
The south part has 3 jettied gables on the front and all the timber-framing
is exposed. The upper storey is jettied on the whole front and there
is a beam carved with ribbon ornamentation. There are 2 four-light mullioned
windows on each storey flanked by high level mullioned windows which
extend across the whole front. There is a modern "old style" porch entrance.
The south side has exposed timber framing, leaded casements and a 4-centred
arched doorway with carved spandrels. The interior has many interesting
features and there are large cellars.