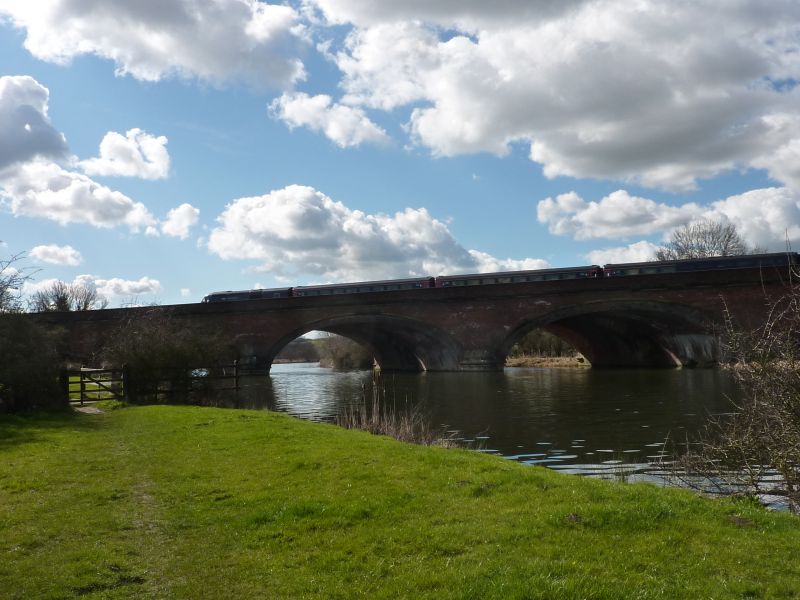 Skew viaduct across the River Thames built in two phases as two separate but neighbouring structures sharing cutwaters. The west (or fast) viaduct was built 1838-40 to the design of Isambard Kingdom Brunel, and the east (or relief) viaduct is of 1890-3.

DESCRIPTION: c. 160m long and 20m wide across both structures. The viaduct has an acute 60° skew. The west (fast) viaduct has four low semi-elliptical arches springing from water level, with a square span of 62ft (19m). Round cutwaters are boldly moulded in ashlar. Other dressings are rusticated voussoirs and a string course with stepped roll moulding. Parapet with plain coping, and with a small projecting C20 brick refuge above each pier. Areas of refacing in later red brick, especially in the spandrels, but also including at least one keystone, and many tie plates. Raked abutments on either bank, wider and parallel to the line, with angled walls to the face of the viaduct. The east (relief) viaduct is similar, but instead of voussoirs has a stone roll moulding around the arch rings on the east face, and multiple courses of dentilled brickwork on the inner face, nor does it have refuges. Three vaulted brick footbridge decks carried on strainer arches join the two viaducts at rail level. Spanning between the two structures at this level are also non-original steel beams supporting a large diameter pipe.

The extension, while of less intrinsic merit, is nonetheless impressive, designed with great respect for the existing structure in high-quality brickwork.

The viaduct is prominent in the landscape of the River Thames valley where the river flows into the Goring Gap, in an Area of Outstanding Natural Beauty.

The Great Western Railway was authorised by an Act of Parliament in 1835 to construct a line from London to Bristol. At 118 miles this was slightly longer than the other major trunk railway of its time, the London and Birmingham (112 miles) and considerably longer than other pioneering lines. Construction began in 1836, using a variety of contractors and some direct labour. The first section to be completed, from London to Maidenhead Riverside (Taplow), opened in 1838, and thereafter openings followed in eight phases culminating in the completion of the whole route in 1841.

The engineering of the railway was entrusted in 1833 to Isambard Kingdom Brunel (1806-59), who was already known for his engineering projects in Bristol. More than any other railway engineer of his time he took sole responsibility for every aspect of the engineering design, from surveying the line to the detailing of buildings and structures. He sought to achieve as level a route as possible and, working from first principles, he persuaded the Directors of the GWR to adopt a broad gauge of 7ft 0¼ in rather then the standard (4ft 8½in) gauge in use on other lines. A two-track broad-gauge line was 30ft wide, and this determined the span of the overbridges and other structures. Except for larger bridges such as Maidenhead Bridge, the majority of Brunel’s masonry bridges did not need to be as innovative as his works in timber and iron, and his structures followed the typical architectural idioms of his time, but they were all beautifully detailed and built and together they formed integral parts of a consistently designed pioneering railway.

By the 1870s the growth of traffic, especially at the London end of the route, necessitated the widening of the line from two to four tracks. This was carried out in two stages, from London to Taplow in 1875- 84 and from Taplow to Didcot in 1890-3. By the time of these widenings the broad gauge was being phased out (the final conversion to standard gauge took place in 1892), and the design of the extended or new structures took this into account. However the designs were exceptionally sympathetic to Brunel’s original designs, in form and detail; also in the choice of materials, although engineering brick, seldom or never used by Brunel, began to make an appearance in the 1890s. The engineers chiefly responsible for the widened lines, whose names appear on the surviving archive drawings, were William George Owen (1810-85), Lancaster Owen (1843-1911) and Edmund Olander (1834-1900).

Brunel’s chosen route, designed to be direct and level, required the line to cross the River Thames twice in the narrow Goring Gap, west of Reading. This was achieved by two similar skew viaducts at Gatehampton (MLN14402) and Moulsford (MLN14730), built less than 3½ miles apart c1838-40. John Hammond was Brunel’s assistant engineer on this section of the line. These are brick structures with four flat semi-elliptical arches. As with other large bridges on the route, Brunel reduced the forces acting through the structure by using a system of internal longitudinal walls and voids to lighten the superstructure above the arches. This reduced the mass of the bridge and its foundations, saving material, time and cost. Surviving contract and construction drawings illustrate these features.

Though all these characteristics are shared with the Maidenhead Railway Bridge, the local conditions in the Goring Gap did not require the engineering daring of that celebrated structure, and Moulsford and Gatehampton viaducts have shorter spans. Nevertheless they are handsome and substantial, with a presence in an admired Thames landscape, and were illustrated by JC Bourne in his History.

When the line was widened for four tracks west of Maidenhead in 1890-3 drawings were produced to extend both viaducts on the east (Up) side to carry the new Relief Lines. This was implemented at Gatehampton but at Moulsford a new structure was built a few metres apart, sharing cutwaters with the 1830s viaduct and joined at deck level by access bridges. These new structures were executed with great sympathy and with little variation from the Brunel elevations. In contrast to Maidenhead, because the widening was undertaken on one side only, the west (Down) elevations of Moulsford and Gatehampton Viaducts are still those of Brunel. Since the 1890s, there have been no major alterations, but a number of tie-rods have been inserted in the 1840 structure, which has also been partially refaced in red brick.

Moulsford Viaduct, built 1838-40 to the design of Isambard Kingdom Brunel, is designated at Grade II* for the following principal reasons:
* Date: it belongs to the pioneering phase of the GWR under Brunel, and of railway construction nationally;
* Design, engineering and material interest: it is particularly notable for its exceptional size, for its 60º skew, a striking feature in the landscape, and is one of the most impressive structures on the route. The elliptical-arched design is especially elegant and the brickwork of very high quality. The extension, while of less intrinsic merit, is nonetheless impressive, designed with great respect for the existing structure in high-quality brickwork;
* Historic interest: designed by Brunel himself;
* Intactness: the west face of 1838-40 has undergone relatively little alteration, and since the relief viaduct is a discrete structure rather than doubled onto the existing, much of the east face has survived; the original viaduct can thus be appreciated as an entity. The division between the two phases is strikingly and instructively clear, so that the nature of the widening works can be readily understood.