The Queens Hotel and Attached Railings to Front 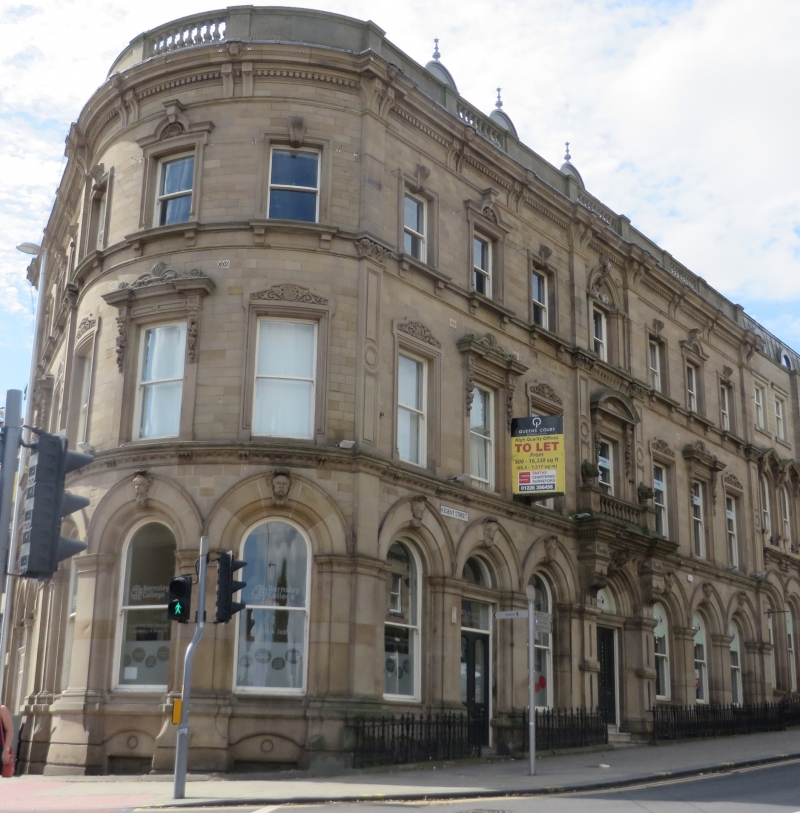 Entry Name: The Queens Hotel and Attached Railings to Front

SE30NW BARNSLEY REGENT STREET
(south side),
Barnsley
3/69 The Queen's Hotel
and attached railings
to front
GV II
Hotel and attached railings. 1874 by Wade and Turner. Addition to west
may be slightly later. Ashlar. Roof not visible. Classical style. 3
storeys with attic. 3 bays to Eldon Street, 3 rounded-corner bays, 7 bays
to Regent Street plus an addition of a further 4 bays to right. Symmetrical
facade to Regent Street: central bay and each end marked by pilasters with
acanthus capitals. Central round-arched enriched portal with double, panelled
door and consoles supporting heavy dentilled cornice. Carved head of Queen
Victoria as keystone. C20 canopy. Round-arched ground-floor sash windows with
carved-head keystones and pointed hoodmoulds. 1st-floor sash windows on
decorative sill band all square-headed, the central one enriched with garlanded
lions-head consoles supporting segmental pediment, with balustrade with urns.
The other lst-floor windows have architraves and enriched heads, windows in bays
2 and 6 with garlanded lions-head brackets supporting heavy enriched cornices.
Square-headed 2nd-floor sash windows on sill band with architraves and enriched
keystones, the central one with a round-arched tympanum enriched with 2 cornucopia.
Windows to bays 2 and 6 have cornice and pediment. Heavy-dentilled cornice on
paired console brackets, with carved heads. Tall, panelled and balustraded
parapet. Round dormer windows with finials. Tall decorative stacks with wide
moulded cornice and round caps. Decorative cast-iron railings to front of this
facade. To the right the addition consists of 4 bays with paired, single,
and triple-light windows (left to right), round-arched to ground-floor, those to
right of entrance in bay 2 having cast-iron fluted colonnettes with foliated
capitals and rusticated voussoirs. Ground-floor cornice. Round-arched lst-floor
windows with triangular pediments. The 2nd floor is a later addition, probably
early or mid C20, with square-headed windows. The corner bays are as the main
facade and the Eldon Street facade likewise except for the ground floor which is
framed by pilasters surmounted by a dentilled cornice and has 3 round-arched
openings with cast-iron fluted colonnettes with foliated capitals and slender
continuous hoodmoulds with lions heads.