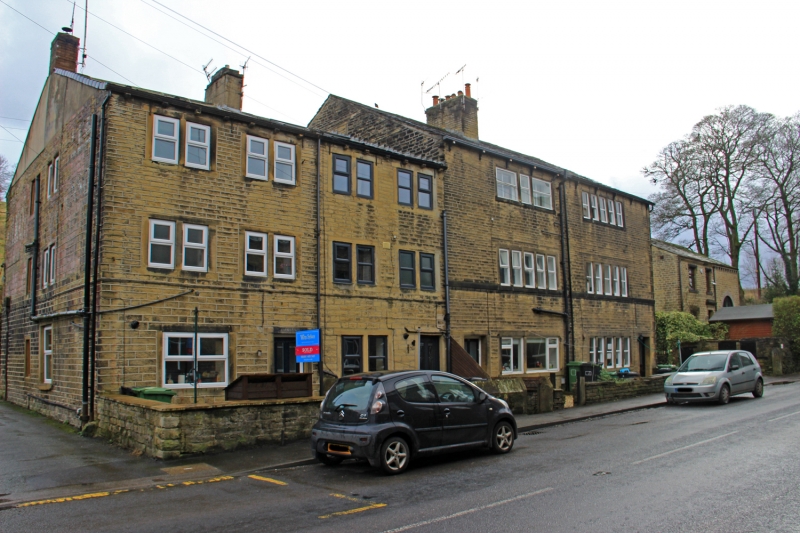 Part of terrace comprising four back to back units, early C19.
MATERIALS:Constructed in hammer dressed stone with a stone slate roof, central ridge stack and a first floor sill band.
PLAN: The block has three storeys and two bays each divided along the long axis. There is a single storey extension between the rear units to the south-east, and a single storey extension is attached to the southern end of No 52. It is attached on the north-east side to a later row of two storeys.
EXTERIOR: The north-west elevation has one five light, flat face stone mullioned window to each floor for each unit, except left hand ground floor which has lost all its mullions and the left hand second floor which has lost the outer two mullions. Two front doors are to the outer side of each unit. The south-east elevation is similar, with all its mullions intact, and has a single storey flat roof extension between the two units. There is a door to the left and right and a further entrance to the single storey extension. The south-west gable end is rendered and has an entrance and scattered fenestration, including a round-arched window at the apex, slightly off-centre. This is in line with the window below, and together they appear to have formed a stair window which has now been partially blocked. The gable end has large quoins which are not repeated at the north-east end. The north-east gable end has the remains of masonry projecting beyond the end of the building near the top and above the level of the adjoining property. No 66 has undergone some alterations, including the addition of a kitchen extenion and window replacement.
INTERIOR: The interior of No 66 consists of a living room with a kitchen in the flat roofed extension to the ground floor, with a small hall and stairs to the first floor. Ceiling beams are visible and there is an under-stair cupboard. The first floor has a single bedroom and a bathroom, and boxed stair with open treads to the second floor. Partly covered by the stair is a blocked in doorway leading to the adjacent unit, formerly part of the same property. The stair leads directly into the upper floor which has a second room partitioned off it. The ceiling is unplastered with beams and boarding exposed. Other interiors were not inspected.
HISTORY: The properties, of a type known as weavers cottages because of the window runs to the upper floor, first appear on the 1854 OS map and the 1892 edition shows the block divided into 2, with a further 2 units to the north-east, but are likely to date from the early part of the century. Between 1906 and 1932, the buildings were subdivided to form 4 units, with division also in the unit to the north-east. Evidence from the fabric of the block indicates that it formerly extended to the north-east and that the north-eastern part was later replaced with the current two storey block (not listed); it is not clear when this occurred as the maps show no alteration of the footprint of the buildings.

REASONS FOR DESIGNATION
Nos 52, 54, 56 and 66 Huddersfield Road are designated at Grade II for the following principal reasons:
* They date from the early nineteenth century, almost certainly before 1840
* They are substantially intact examples of weavers' cottages, an important regional type
* They retain the distinctive characteristic window pattern of weavers' cottages as well as original fabric and construction from the early nineteenth century
* Their evolution from larger dwellings into smaller units is an interesting example of the development of the factory system and the demise of independent weavers working from home.