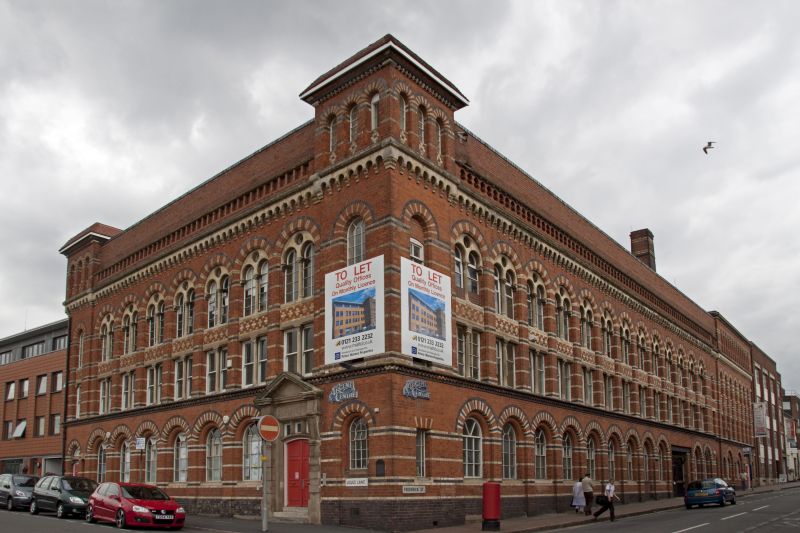 Red brick with stone and gault and buff brick dressings, banding and chequerwork achieving a lively polychromy. The arcaded elevations take their inspiration from Florentine-Lombard early Renaissance palazzi with corner towers to the nine bay Legge Lane front and the Hamman providing a similar emphasis to the end of the 22 bay Frederick Street range. The ground floor is slightly battered, its carcaded windows with polychrome voussoirs. A billet mould string course forms the base of the principal two storey arcade containing two light windows divided by colonettes, those on second floor with stone plate tracery in the arches. Stone machicolated main cornice with low parapet, originally pierced and later heightened in plain brick nearly to the eaves of the tower belvederes. The latter had tiled spires which have been truncated. The Hamman block has plain sash windows in the narrower bays of its arcade corresponding to those in corner towers and with the same arcaded lights to its belvedere storey. The pedimented doorway to Legge Lane is c1900 insertion. Modern waggon entrance to Frederick Street. Segmental arched doorway to former Hamman contained in right hand of three large ground floor arches. The fireproof construction is of some interest, the floors consisting of flat hollow brick arches with wrought iron tie rods linked to right L iron skewbacks, the floors are paved with brick internally and the flat roof was asphalted. The chimney stack rising to the rear of the former Hamman is square and tapered with polychrome banding to the cap. This stack served the engine of the manufactory, excess steam being used for the baths.

The Argent Works are the large in the inner jewellery quarter area and Legge Lane elevation dominates Newhall Hill.