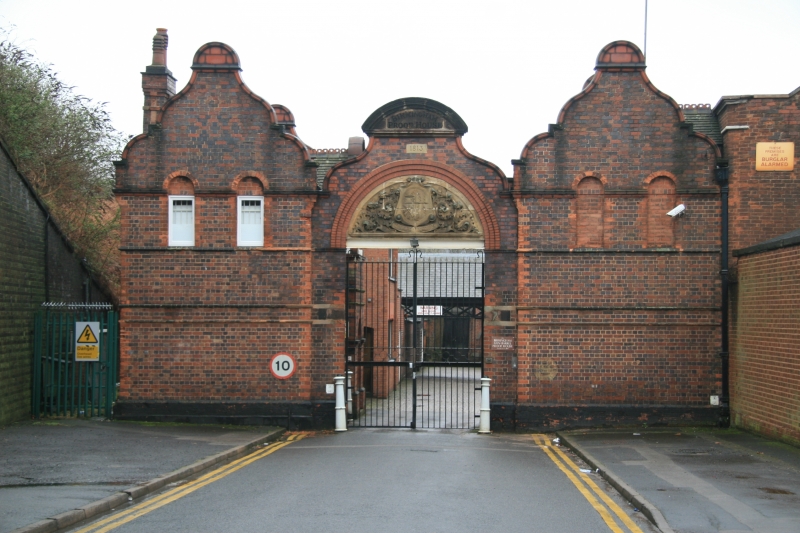 Location: Bordesley and Highgate, Birmingham, B9

HISTORY: The Gun Barrel Proof House was set up as a statutory institution by an Act of Parliament of 1813 to test barrels and completed guns. The Act was requested and obtained by the Birmingham trade and the Proof House was run at its own expense. It was, and still is, governed by a Board of Guardians composed of Master Gunmakers, magistrates and councillors and run by a Proof Master. Gun barrels and complete guns are tested by inspection and are fired to ensure their soundness and marked with a die stamp if they are passed. The original building of 1813-14 was designed by John Horton of Bradford Street, Deritend. A watercolour drawing of this time shows the original treatment of the north-facing, entrance front, which had a Tuscan throughway, which led to the yard behind. To the east of this were five bays and to the west were four. At the centre of the rear yard and on line with the central arch was the original magazine, which was treated as a classical kiosk. The survey plan of 1833 by Henry Jacob shows that the four bays at west belonged to two houses for officials of the Proof House, entered from a passageway common to both. These were altered in 1868-70 by Bateman and Corser and converted into workshops and at the same time the facade was altered to make it more symmetrical with five bays to the west side of the arch. Also at this same time the throughway appears to have been filled in and a semi-oval staircase added. A new, plainer magazine was added at the centre of the yard by the same architects in 1876. Prior to this, in 1860, a new `Proof Hole', or testing house, of four bays had been built to designs of Charles Edge. The entrance range to the forecourt was added by Jethro Cossins in 1883, including an archway which was raised in height in 1970. A bomb fell in the yard in 1940 and caused the destruction of one bay of the 1860 Proof Hole and the associated range of loading rooms along the south wall.

REASONS FOR DESIGNATION: The Gun Barrel Proof House is designated at Grade II* for the following principal reasons:
* The original range of buildings designed by John Horton and built in 1813 has distinct architectural quality and includes an impressive gateway and board room.
* The large Proof Hole of 1860 by Charles Edge suffered some damage in the Second World War but despite this is a remarkably intact example of its type with a large number of original fittings.
* The buildings were designed as an obvious, public expression of one of Birmingham's foremost industries which was pre-eminent in England throughout the C19, and the pride which it took in its reputation.
* The full complex of buildings, including proof rooms, loading rooms, inspection rooms and magazine provides a clear indication of the functioning of the Proof House.