A Grade I Listed Building in Reigate Hill, Surrey 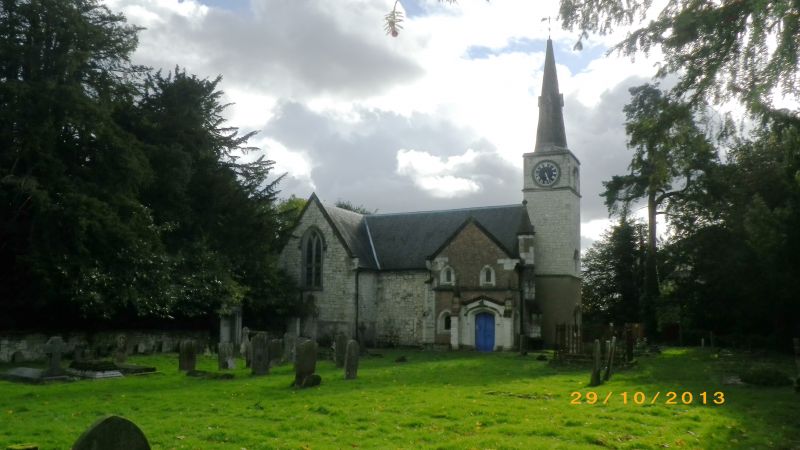 I
Church. Circa C13 origins. Extensively altered in C18 and early C19.

EXTERIOR: the transepts and porch block have coped gables with kneelers and the transepts have tall Gothick windows with Y-tracery. The other windows are a mixture of styles (mostly Perpendicular) and sizes, but including one apparently medieval lancet in the east wall of the south transept. The proud architraves of the south side windows indicate that the wall was intended to be rendered. There are various blocked openings in the north wall and south walls. Slender three-stage tower with lozenge-plan buttresses at the north east and south east corners, terminating in giant octagonal pinnacles with finials. The west face of the tower has a Tudor arched west window, a deeply recessed wide lancet and a slender lancet to the upper stage. Clock face on north face and a blind roundel on the south; tall shingled spire. Attached to the north transept, which contains the family pew, there is the remnant of a former covered way to the house.

INTERIOR: Pointed plastered roof to nave and lower roof to chancel, plastered groin vaults to transepts. The imported fittings are remarkable, and not all are referred to here. The nave is lined with tiers of Flemish baroque choir stalls, facing one another across the nave, with shaped ends with carved cherubs' heads and claw feet. The stalls have misericords and originate from a Benedictine monastery in Ghent. The stall wainscoting and canopies, which extend across the transepts and have timber pinnacles to the cornice, are from the Church of Our Lady, Aarschot, Brabant, the cornice dated 1515. The chancel is lined with C16 panelling from Burgundy, the lower tiers linenfold with blind flamboyant tracery in the upper tier. The reredos has panels of text in traceried timber frames. The timber sanctuary rails consist of arcading with clustered shafts and a tier of pierced quatrefoils over. A polygonal timber pulpit projects from the south transept gallery, the carved figure panels are thought to originate from a reredos, with another panel worked into the front of the altar. The north transept is the family pew, lined with upholstered seats and chairs with panelling above and a Victorian timber chimney-piece with overmantel in the Gothic style. The west end is screened off by a five bay medieval Perpendicular English church screen with the organ gallery frontal above. West end font with plain octagonal stone bowl on a cylindrical stem with corner shafts and stiff-leaf foliage capitals. Stained glass includes a south window of French C16 glass; an east window of c.1500, a very fine C15 east window in the south transept and an early C16 west window with the arms of Henry VII. Several oil lamps survive, converted for electricity.

HISTORY: sited in Gatton Park, close to an ancient route, the North Downs ridgeway, and to a large house (now a school), rebuilt in the 1830s by Lord Monson, who also thoroughly rebuilt and refitted the church in 1834. A church is mentioned in the Doomsday Book, but very little medieval fabric is now extant. In the 1830s Lord Monson and his architect, E Webb, added transepts and incorporated ecclesiastical fittings collected from all over Europe, either on the patron's Grand Tour or possibly from London dealers which were established by this date. The Colman family, who bought the estate in 1888, continued to add furnishings to the church.

Outstanding overall as an extreme example of C19 antiquarian interests and for the quality of its collection of imported C15 and C16 timber fittings and stained glass, mostly introduced in 1834 by Lord Monson. The family pew is described by Pevsner as 'among the best in the country'.