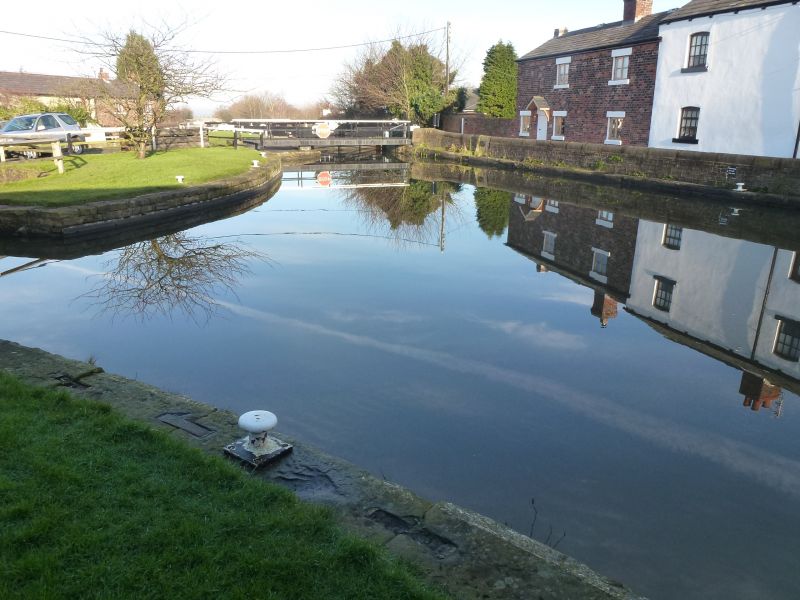 Includes: Junction Bridge canal basin & fmr. dry dock, Top
Locks (that part Burscough CP) LEEDS-LIVERPOOL CANAL
BURSCOUGH.
Canal basin and dry dock. c.1781. Resident engineer Richard
Owen. For the Leeds-Liverpool Canal Company. Coursed sandstone
blocks, and coursed sandstone rubble, respectively. The BASIN
forms the inner entrance to the Rufford Branch Canal, leading
to the upper of the two Top Locks. The east side is straight,
with a narrow flagged footpath against the towpath wall, which
is of coursed squared sandstone with a rounded coping; the
west side is in 2 convex sections, forming a curved funnelled
entrance to the dry dock.
The DRY DOCK, which is at right-angles to the basin, has an
entrance gate composed of massive wooden beams slotted into
the side walls, a straight south wall (parallel to the main
line of the Leeds-Liverpool canal), and a curved and sloped
north side, with one flight of steps down at the east end of
this side and another in the west end wall; and the floor of
the dock has a set of 6 wooden trestles to support the boats
(apparently restored). Forms the central element in the group
of canal structures at Top Locks. Located on boundary between
Burscough CP and Lathom CP.