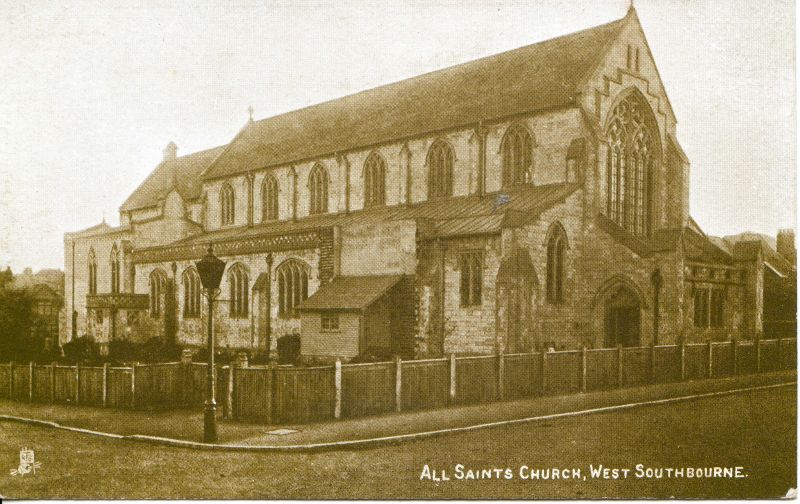 PLAN: Six-bay nave, lean-to aisles, west narthex, porch-tower at the north-west, chancel with north chapel and south organ loft. Vestries under the east end. An intended tower of four stages at the north-west was not built.

EXTERIOR: A big and rather conservative design. The tracery is Flamboyant, most notably in the dominant west window of six lights (two sub-arches of three lights, with a central mullion rising right to the apex of the arch). Between the head of the window and the gable is a stepped-up string course. The clerestory has coped buttresses, and three light windows with simpler intersecting tracery. The chancel has a chequerwork eaves frieze, echoed in the simpler alternating block friezes of the north chapel and clerestory. On the site of the intended tower at the north-west, a big porch was built in 1956, to which a plain and boxy second stage was added in 1969, with quatrefoils in the parapet. The big diagonal buttresses suggest the plan for a tower was still alive in 1956, however it barely rises above the aisle roofs.

INTERIOR: The long high nave has a timbered tie-beam roof with lean king-posts. The nave arcades have circular piers, octagonal moulded capitals and double-chamfered arches. In the bottom of the spandrels between the nave arches are quirky cusped dagger motifs, a motif used earlier at St John the Evangelist, Boscombe. The higher chancel arch is on angel corbels. The chancel is not long, though quite high, with small side windows very high up. The roof is boarded and without tie-beams. On the south are two high arches opening into the organ loft, with a central pier as in the nave, the responds dying into the walls. Two similar arches on the north open into the chapel. The floors are tiled, with cast-iron heating grilles lining the aisles.

PRINCIPAL FIXTURES: Elaborate font on eight octagonal colonettes of green marble, given c. 1913. The bowl has rectangular panels with carving. There is a tall ogee-curved font cover of oak. The oak pulpit has a densely carved tester with pinnacles at the angles. The oak chancel and sanctuary fittings are largely contemporary with the building, in the late Perp style; parclose screens to the north and south, excellent choir stalls, their panelled fronts pierced with alternating squares and long narrow panels, each with Flamboyant tracery. In the sanctuary is a priest¿s stall with a high canopy. The reredos has a gilded frame and riddel posts with standing angels. Upholstered seating in the nave was given in 1996; shortly after, the east end of the nave was reordered with a nave altar and simple iron-and-oak rails. The stained glass in the east window is a war memorial designed by Percy Bacon and installed in 1921; it depicts the King of Kings surrounded by angels, prophets, and at the bottom, the patron saints of the Allied nations. Three windows in the north chapel are signed by Bacon, c. 1921-7, and one in the baptistery, 1926. Two aisle windows of the 1930s possibly his too.

HISTORY: All Saints was a High Church foundation, established as a daughter church of St James, Pokesdown. Its first building of 1902 was an iron hut, which later became a church hall on the south side of the church. The permanent church was designed by J. Oldrid Scott in conjunction with C.T. Miles of Bournemouth; they also designed St John the Evangelist, Christchurch Road, Boscombe (1893-5), and St Andrew, Florence Road, Boscombe (1907-8). However there is a working drawing for All Saints in the RIBA collection signed by T.G. Jackson, 1913. The church was built for a cost of £16,000; A. White Bowman, builder. Percy Bacon's original drawing for the east window was given to the church by his widow in 1936. The parish¿s legal title is All Saints, Pokesdown (since July 31, 1930); however it is usually known as All Saints, West Southbourne. The proposed tower (original design reproduced in Strickland) was never executed.

REASONS FOR DESIGNATION
The Church of All Saints is designated at Grade II for the following principal reasons:
* A big late Gothic Revival church which makes a significant contribution to the streetscape
* One of several High Anglican churches in Bournemouth designed or enlarged by the Scott family
* Good Neo-Gothic fittings contemporary with the church
* Stained glass by Percy Bacon, mostly of the 1920s, including an impressive east window of seven lights