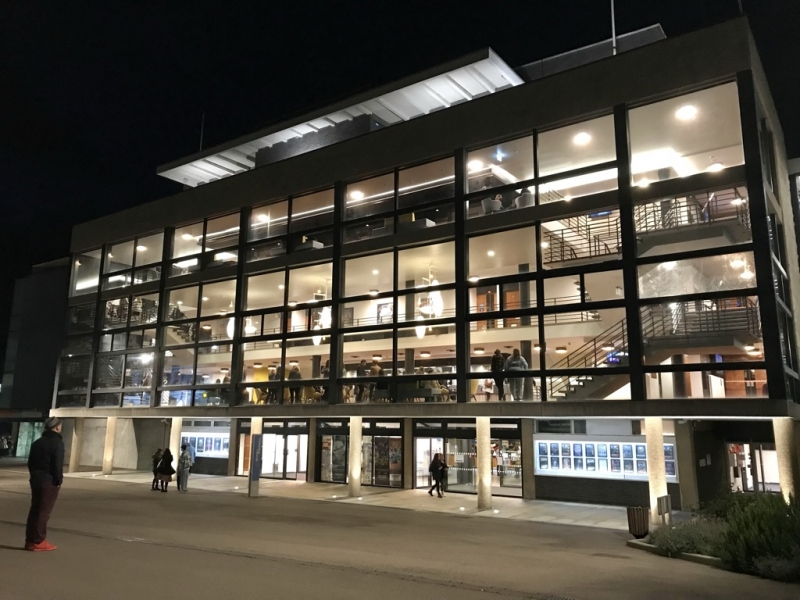 Theatre and conference centre. Designed 1958, built 1961-3, by Bryan and Nonnan Westwood and Partners. Ove Arup and Partners engineers; acoustic consultant Hugh Creighton. Reinforced concrete frame, with exposed aggregate to ground-floor pilotis, the auditorium and foyer over these clad in precast panels, with large areas of glazing to front foyer spaces directly fixed by butyl gaskets to the metal-finished frame. Subsidiary areas clad in blue-grey and stock brick, with textured cut-brick panels to rear elevation overlooking Devonshire Park by Eric Peskett under aluminium-clad fly tower. The functional parts of the building are thus carefully expressed in the materials used. The plan is similarly of three parts. To front, foyer on three levels; auditorium behind with 1,678 seats set in balcony and stalls, with two tiers of side slips which can be used for conferences and concerts, and a flexible rostrum that can be raised as an apron or louvered into ground floor as orchestra pit to rear of cloakroom and stores; large stage and fly tower at rear. The fall in ground level to the rear of building is cleverly used to provide orchestra pit and dressing rooms under stage at ground floor level. Symmetrical facade to front of five and two half bays, the grid of full glazing carried one bay round side of building and set in expressed frame of concrete over recessed pilotis; this frame forms high parapet and is emphasised by the strong horizontals of second-floor band and upper roof terrace. Three tiers, each of five windows, to sides, give light to auditorium when used for conferences. The interior retains many fine finishes in original condition. The generous foyers have concrete slab paving and blue bricks, above which the sloping ceiling is formed of the precast balcony, its grid expressed by concealed lighting in the soffits. Auditorium lined with timber, moulded balcony fronts, plaster ceiling with deep soffits giving concealed lighting; other lighting a pattern of recessed spots. Demountable reflector shell over stage with flexible proscenium width. Given the difficult brief, the acoustics here are a notable success because the deep bass compensates for the necessarily short reverberation time. The Congress Theatre is a notable success answering a difficult brief at a time when large concert halls were having to provide improved acoustic while fulfilling dual demands of conference needs. The building is important because every aspect of planning and design has been carefully thought through.
(Architectural Review: January 1958: 10-11; The Builder: 18 April 1958: 717; Interbuild: May 1961: 15- 16; Architects' Journal: 31 July 1963: 236-43; Architect and Building News: 31 July 1963: 171-77).