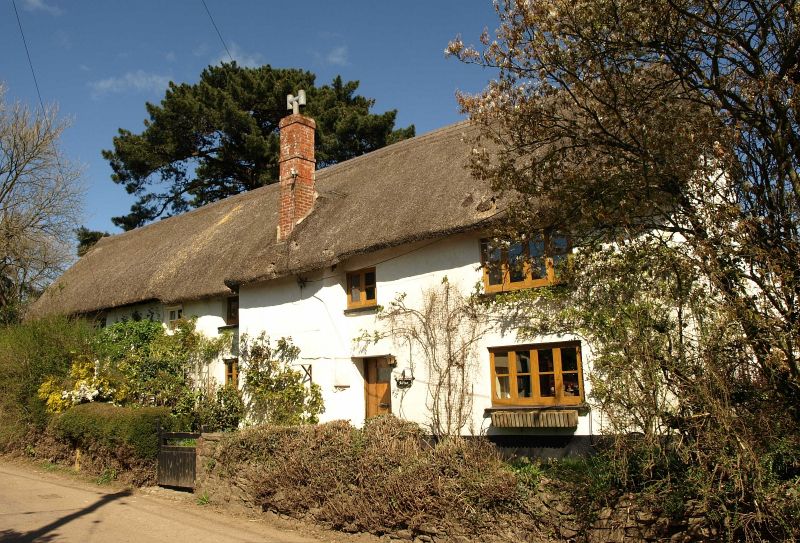 2 adjoining houses, formerly 3 cottages and originally a farmhouse. Probably a C16
core, much rebuilt when divided into cottages in late C17 - early C18, rearranged to
2 houses and modernised circa 1975-80. Plastered cob on rubble footings; rubble
stacks topped with C20 brick; thatched roof. Interpretation of the development of
these 2 houses is now not easy. Together they apparently form a 3-room-and-through-
passage plan house facing west - with the original service room on right (south) end
and with 2 rooms later added onto inner room. Now Sarum occupies the original hall,
passage and inner room to right making a 2-room house with rear of passage occupied
by C20 stairs. Ferncott on the left now comprises a 2-room cottage with circa 1975-
80 stair rises against rear wall and both extension rooms joined by demolition of
party wall. Rear lateral stacks to inner room (Sarum) and on first extension to
inner room (Ferncott), and former hall stack projecting ostentatiously from front
(Sarum). 2 storeys. Overall 6-window front of late C19 and C20 casements with
glazing bars and one small C18 3-light window at first floor level over the door to
Sarum and right of the front stack. It has flat-faced mullions, central casement and
contains small rectangular panes of leaded glass. Late C19-early C20 door to Sarum
to right of stack and C20 door to Ferncott at left end of main block. The extensions
at left end are both recessed slightly from main front. Roof is half-hipped to right
and gable-ended to left. Interior shows mostly late C17-early C18 features. Main
internal divisions are full height cob crosswalls. The putative former service room
(at right end of Sarum) has chamfered axial beam with straight cut stops and restored
rubble fireplace, its oak lintel is chamfered with worn stops. The hall (in Sarum)
has an unstopped chamfered axial beam. The fireplace was reduced in width probably
in late C18 by filling left side and including a cloam oven. These alterations have
obscured the stops either end of chamfered oak lintel. The former inner room (now
Ferncott) has renewed ceilings. The fireplace in late C17-early C18 extension has
been renovated, its oak lintel is chamfered with straight cut stops. Stairs of circa
1975-80 apparently replacing earlier staircase which was lit by tiny window, now
blocked. Right end room has been converted from former barn open to roof with C19 A-
frame truss. Rest of roof probably late C17-early C18 A-frame trusses throughout.