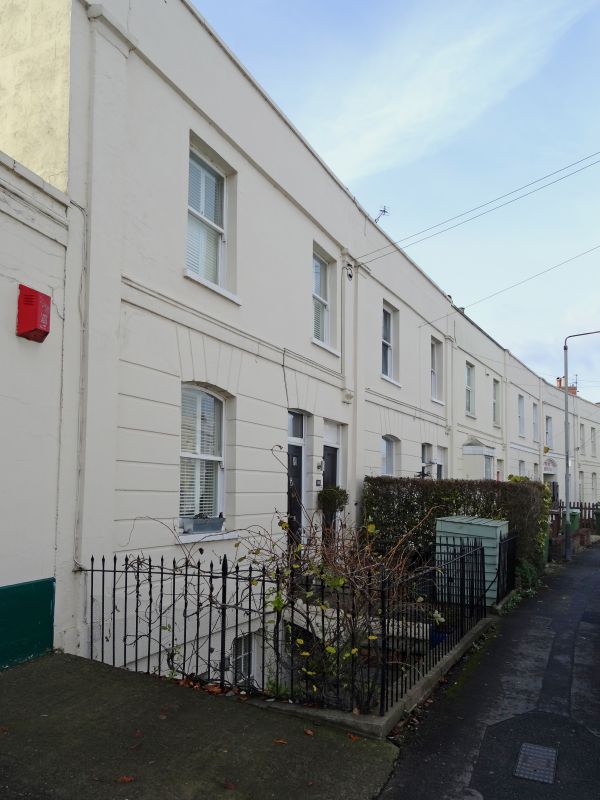 Terrace of 6 houses and attached railings to No.145. Numbered
right to left. c1806-1835, with later additions and
alterations. Brick with stucco facades and slate roofs with
stucco party-wall stacks with cornices to Nos 135, 139, 141,
143 and 145; iron railings and gates.
EXTERIOR: 2 storeys, with basement to No. 145, 12 first-floor
windows (2 per house). Stucco detailing includes horizontal
rustication to ground floor where original; voussoirs over
ground-floor openings; moulded first-floor band; full-height
Doric pilasters to ends of No.139, to right end of No.135, and
to left end of Nos 141, 143 and 145; and shorter Doric
pilasters mainly on corbels through first floor to left end of
Nos 135, 137 and to right end of Nos 141, 143 and 145; frieze,
cornice remains to No.141, and blocking course with copings
(except to No.141). Windows: 8/8 sashes where original, those
to ground floor (except to No.137) have cambered arches.
No.141 has C20 bay (in former entrance), with tent roof over.
Entrances: to No.135 at left, to No.137 within arch at left,
otherwise at right; No.139 has 4-panel door, otherwise C20
doors with fanlights, in cambered-arched surrounds. Nos 141,
143 and 145 have further right entrances with overlights to
passages; No.137 has tall, wide elliptically-arched opening to
left with tooled arch.
INTERIOR: not inspected.
SUBSIDIARY FEATURES: spearhead area railings with stanchions
to No.145.
HISTORICAL NOTE: Fairview Road was developed from c1806; it
occupies part of the open fields 'inclosed' by Act of
Parliament in 1806 to enable their development as building
land.
(Sampson A and Blake S: A Cheltenham Companion: Cheltenham:
1993-: 45).