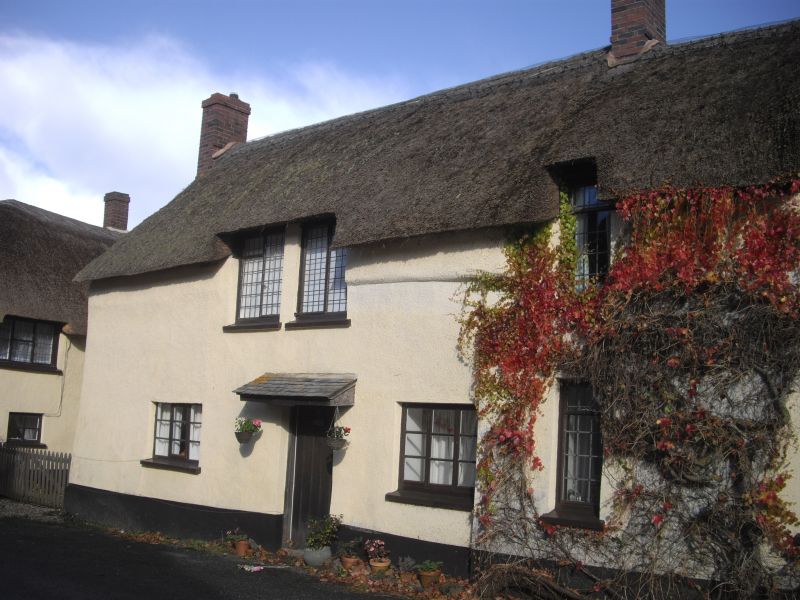 2 adjoining cottages, originally one house. Late medieval origins, remodelled in the
later C16/early C17, date of sub-division into cottages unknown but some C20
alteration of internal partitions. Creamwashed rendered cob and stone; thatched roof
with a plain ridge, gabled at ends (Virginia Cottage probably originally hipped at
the right end); left end stack and axial stack with brick shafts.
Plan: A single depth south-facing main range. The present arrangement is Newcott to
the left (west), 2 rooms wide with a central entrance facing a stair; Virginia
Cottage to the right (east) 2 rooms wide with a stair rising against the rear wall
from the right hand room. Both cottages have been re-organised internally but
surviving evidence suggests that Virginia Cottage was the higher end consisting of a
hall and inner room. Newcott containing remnants of the throught passage (at the right
end) with blocked opposed doors and the headbeam of a plank and muntin screen in
situ. The rest of Newcott is, presumably, the lower end but is unusually long. The
house originated as a medieval open hall, the smoke-blackened medieval timbers
surviving in Virginia Cottage. It was not clear on survey (1987) whether Newcott was
also open to the roof timbers or whether the lower end (also of jointed cruck
construction) was always storeyed. The open hall was floored in the late C16/early
C17, presumably with the hall stack backing on to the passage, the position of the
present axial stack, which appears to be a C20 replacement with a smaller chimney
breast and staggered fireplaces. The lower end probably functioned as the kitchen in
the C17 (large bread oven) and the inner room has never been heated. The lower side
partition of the through passage has been moved and the screen has been re-sited on
the right hand wall of the C17 kitchen.
Exterior: 2 storeys. Asymmetrical 5 window front (2 windows to Newcott), the eaves
thatch eyebrowed over 4 first floor windows. C20 plank and stud estate door in the
centre of Newcott with a slated porch hood, flanked by 3-light C20 timber casements
with glazing bars, the right hand window converted from the original front door to
the through passage. The first floor dormer is glazed with a pair of 2-light C20
casements with square leaded panes. Virginia cottage is more irregular with a C20
estate plank and stud front door to right of centre, the slate door hood carried over
as a pentice to a 1-light C20 casement to the left with square leaded panes. 2
windows to the left are C20 timber casements with glazing bars. 3 first floor
dormers glazed with C20 casements with square leaded panes. Semi-circular bread
oven on left return of New Cottage.
Interior: Rich in carpentry. The left hand hand room of New Cottage has a chamfered
stopped crossbeam and a (re-sited) plank and muntin screen with chamfered stopped
muntins. The right hand retains the head beam of the re-sited screen, formerly the
lower side passage partition. Virginia Cottage has deeply-chamfered crossbeams with
step stops. A half-beam of the same design about half a metre in front of the left
end wall suggests that a larger stack has been removed and replaced with the present
chimney.
Roof: Side pegged jointed cruck trusses, the feet descending to the ground, survive
in both houses. Apex of roof inspected only in Virginia Cottage, where smoke-
blackening is visible; the ridge is diagonally-set. The end of a hip cruck is
visible at the right end of Virginia Cottage.
A house of Medieval origins of especial interest both as part of a very unspoiled
estate village but also as one of 8 closely-spaced surviving medieval houses in a
village context.