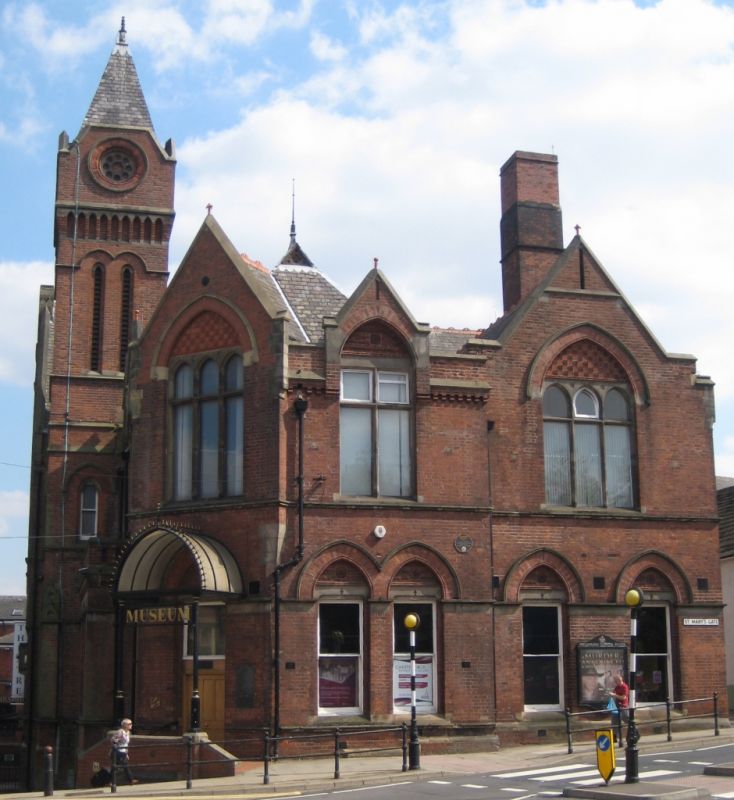 2.
1879. Architects Smith and Woodhouse. Built by public subscription as a memorial
to George Stephenson the railway pioneer who lived at Tapton Hall and is buried
in Holy Trinity Church. Eastern wing added in same style in 1898. Gothic design.
Red brick with stone dressings and slate roof. Building generally of 2 storeys.
Irregular plan with tower set in north-west angle to Corporation Street. Tower
has short spire and corbelled parapet gabled on each facade. Paired lancets below
With string courses and a further window set above Gothic arched door. Facades
to west of tower along St Mary's Gate and Corporation Street. 2 bays each with
additional angled corner window. Gothic arched windows with dripstones, generally
unbarred sashes below. 1st floor windows with mullions and transoms set under
Gothic arches which break through eaves as gabled dormers with finials. To east
of tower, Corporation Street facade includes end (western and eastern) 2 storey
gabled advanced blocks each with fluted centre chimney flanked by Gothic arched
windows with dripstones, mullion and transoms. Lower advanced section asymmetrically
placed between these 2 wings. 1 large Gothic 3 light window in gable end. Flanking
this part, to east and west, 1 storey ranges with gabled dormers which break through
eaves; parapet and blocking course link these together. Recessed 1st floor of
main east-west section rises above these ranges and has similar dormers. The hall
and its tower are prominent landmarks Ref The Builder, July 12, 1879. p. 774.