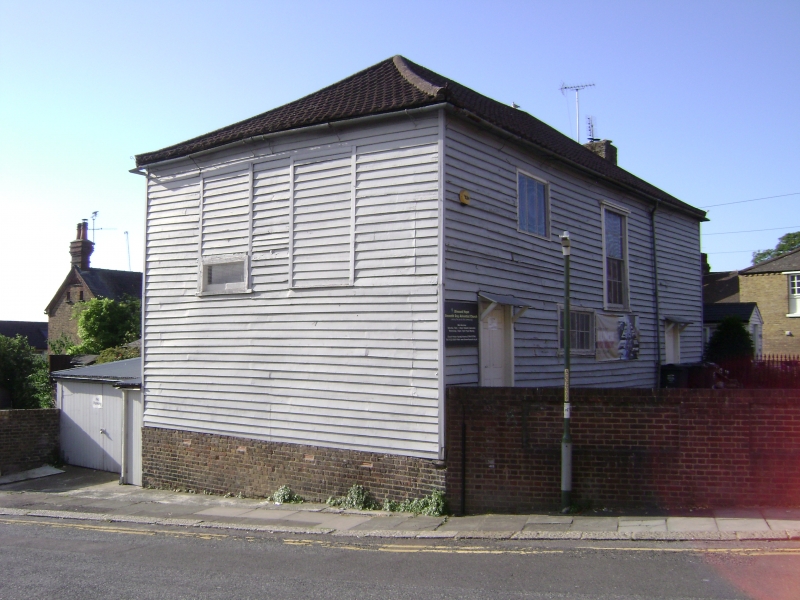 PLAN: Built as a rectangular chapel with no gallery, it was enlarged by extending to the south and simultaneously inserting a north gallery. A further south-eastern extension provided a vestry, kitchen and toilets.

EXTERIOR: As originally built the west or entrance front had two 16-pane sash windows and a pair of doorways below, but this was modified when the building was extended to the south. The southernmost window remained unaltered, the northernmost was truncated because it obscured the later gallery and the doorcase below was modified to form a sliding sash window. Additionally, circa 1800 two doorcases with flat wooden hoods and brackets were inserted, one to the north under the gallery and one to the south. The north side had two large sash windows whch have been blocked. The east elevation was originally similar to the west elevation with two 16-pane sashes before the building was extended. The northern window was reduced in height to accommodate the gallery the other (now central) window is unaltered and there is an 8-pane sash to the north. There is a lower sliding sash window, matching the one on the west side, and at the south end is a lower stock brick lean-to dated 1806 with the initials AW. This consists of a ground floor and basement in a mixture of English and Flemish bond with a C19 casement, smaller C20 window and simple doorcases.

INTERIOR: Access by the northern door in the west elevation leads to an enclosed space under the north gallery which has two iron supports for the gallery, wooden panelled dado and boxed in wooden stairs. The chapel ceiling has been concealed except for a small dome over the gallery. The north gallery has simple panelling and is supported on iron columns. There is a circa 1800 hexagonal-shaped pulpit supported on a moulded column approached up a straight flight of steps with stick balusters and column newel. In the main body of the chapel the original box pews were replaced by late C19 wooden benches, probably from another chapel. The gallery has dado panelling and retains the original fixed rear bench and one of the original benches but the rest are late C19 benches. A six-panelled door to the east of the pulpit leads to a vestry with a panelled partition, door with L-hinges and cupboard with plank doors. The adjoining room also has dado panelling and cupboards and has been adapted to form a kitchen. External entry leads down to a basement with 1806 cambered headed brick oven with stepped head and adjoining circular copper, an unusual survival. From here the basement under the chapel is visible, its centre supported on yellow brick columns.

HISTORY: This chapel was built in 1794 as a chapel affiliated to the Countess of Huntingdon's Connexion, financed by a Mr Wellard a papermaker of Dartford and some of his friends, following a period when services had been held in his own house. The Rev. J Nicholson of Cheshunt College preached at the opening services and the first pastor was a Mr Waring. During the term of the third pastor, Mr Hawthorn, the seating accommodation was increased by the erection of a rear gallery and the extension of the chapel to the south to adjoin Zion Cottages, and the additional floor area included a baptismal pool in front of the re-sited pulpit. An extension to the east including a vestry kitchen and toilets was added in 1806. From 1821-1829, because of the sickness of the fourth pastor, Mr Clarke, the building was let as a National School. From 1829 the building resumed use as a chapel and from 1847 the building was let to a Strict Baptist congregation. In 1918 the trustee put the freehold up for sale by auction. There was some damage during World War II. The north windows were boarded over and the box pews mainly replaced by C19 pews.

REASONS FOR DESIGNATION
* A 1794 former Countess of Huntingdon's Connexion chapel which, following a period let as a National School, became a Baptist chapel in 1847;
* It is constructed of vernacular materials, timberframing with weatherboarded cladding, and retains original windows and doors;
* The interior retains original joinery including staircase to the gallery, gallery, dado-panelling, pulpit and vestry cupboards and has the unusual survival of an 1806 kitchen with oven and copper.